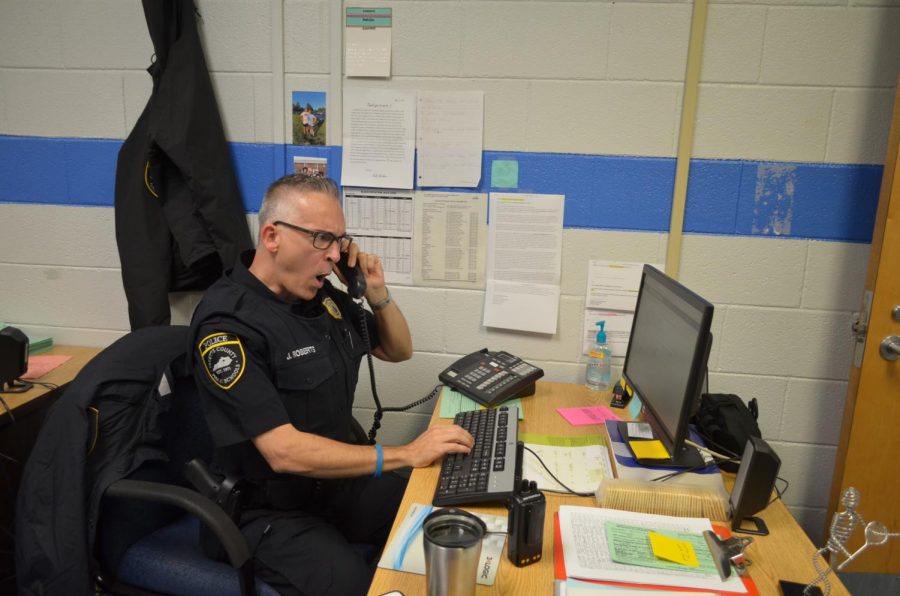 Officer Roberts working in his Office

Truth can get mixed with fabrications, and more of these are towards police officers, fabrications like that all police officers are out to arrest everyone. It seems people are more interested in blaming officers for controversial topics, rather than having a better understanding for why they’re doing what they’re doing. “Why are officers becoming the problem to innocents being wrongly accused?” as some people may say, but is that question accurate? Here at Lafayette High School, we interviewed Officer Jack Roberts, where he gave us some insight of being a police officer.

Officer Jack Roberts, retired from the Lexington Police Department in 2013, quickly realized that this was a mistake and wanted to do more for the community and continue to serve. The moment he got word schools were hiring, he jumped on the offer. After previously attending the Lexington Police Department Academy, where he had 17 weeks of training, along with an additional 23 weeks of training for becoming a “pop-certified” or School Officer. All police officers must go through three to four months of field training with various of policemen who help them become a better policemen. A new house law states, “Officers working in schools, must have additional training then beyond what the academy has, and an additional three-four weeks of training, just for schools.”

It’s obvious that Police Officers go through more training than most people realize, which is why they are so proficient in their job. They get trained by a variety of police officers who help them make their community better. Officer Roberts has trained people who are becoming police officers, saying that it was a pleasure to see people grow and become proficient at their job.

We asked Officer Roberts why he decided to work in schools, rather than going back out in the field. Enthusiastically, he stated, “I love being here, it’s like a calling to me because I know that I’m here for a reason, and to make a difference. I try to be a role model for kids and try to help them.”

He also stated that he and the rest of the officers here don’t have to be here, but they choose to be here in order to make a difference and keep the school safe. They help give kids the right contacts if there are any issues going on, whether that be home-life, or even in school. The Officers here at Lafayette are a team with Administration. They all work together in order to make this school better for the kids. If an officer notices that a student is upset, they will either approach the student themselves or get an administrator to approach the student and make sure everything is okay.  Believe it or not, most officers don’t want to arrest people; they just want to make the community and environment as safe as possible. “Our goal is not to arrest people. It’s not to put people in jail. The goal is to find a different path for behavior [and] to redirect behavior in a positive manner.”

It seems here at Lafayette the officers are here to protect the students to their best ability, and make this a safe and healthy environment. Students would benefit from knowing that law enforcement are here for our protection and not to intimidate us.Law Enforcement has been beneficial for the school system, because it’s a way for students to get accustomed to being near officers without there being a negative interaction.

There is a time in everyone’s life where you have to talk with an officer even when  it’s as simple as talking to him in passing. They don’t want to be known as, “robots in uniforms walking around, we are real people too, we have emotions.“ They want people to interact with them in a positive way and not feel like they have to act differently around them.

The officers here a Lafayette want this to be a relaxed environment, so they like to go up to students and joke around with them, in order to build a relationship and allow a student to know that they have another person they can come to. Officer Roberts goes on to say that, “It’s not a job for me to be here, it’s a privilege,” which means a great deal to not just him but it should to others as well, because neither him nor the other officers here, HAVE to be here, they can go as they please, but they choose to stay. It isn’t fair that more people view officers in a negative group just because there have been a hand full of “bad officers,” because that policemen’s one action should not reflect police officers as a whole.

With the fabrications that go around about police officers and how they are trying to abuse their power. People should look deeper into those sources and find out the truth before accusations are made. Without the help of our officers there would probably be more chaos and awkwardness around officers who are just regular people. The real question isn’t why officers are the problem, but why aren’t people willing to see that they’re here for a good reason?