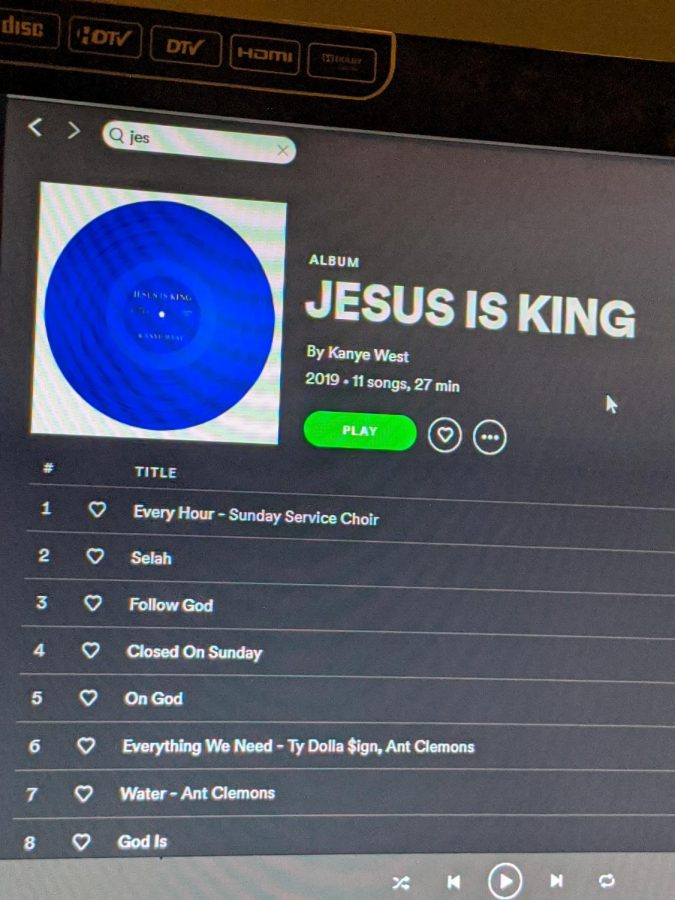 To state my thoughts on this album, the answer is no,I do not like this album., I don’t hate it either but I can’t say I like it. As a long time Kanye fan I’m terribly disappointed. Tell me, was this album worth an almost two year wait? Was it worth all those delays? Let’s contextualize this album first. Before I talk about Jesus is King let’s rewind a little. Yandhi was meant to be Kanye West’s ninth studio album. Yandhi was announced September of 2018 and was supposed to release the 29th. Yandhi was pushed back and then it was pushed back again and again and again. Yandhi never officially released. Fans like me did get a taste of it though. One day an unfinished version of the album entitled the “Yandhi Bootleg” leaked. It was incredible. These songs, albeit unfinished, blew my mind.

I was convinced the album, when completed, would be the greatest thing I had ever heard. Then we were hit with something amazing, a tweet. Kim Kardashian announces the album with a tracklist redubbed “Jesus is King” . Would you believe this unfinished album was better than what we actually got? Jesus is King, like Yandhi also had a bit of a rocky release. First it’s supposed to come out on September 27th and then it gets delayed to the 29th and then it gets pushed to October 25th and then it releases. Now on October 25th Jesus is King is here. The long awaited album is here. This is going to be the greatest album of the year. Oh, eleven tracks? I can deal with that, wait a second. 23 minutes? Oh, oh no. When I played the album I really wanted to love it and I’ll admit the songs are well made but I couldn’t shake that feeling of disappointment.

Before I go into why this album hurts so much, let’s talk about the highlights. “Follow God” is a banger, “Use this Gospel” is just a worse version of “Laws of Attraction/Chakras” but still a banger. Kenny G kills the sax solo and I can’t not be happy about the reunion of Clipse. Push and No Malice, wow. Murdered the track. The two brothers return with as much chemistry as they had on their 2002 debut, “Lord Willin”. It’s great. But personally, I think that’s where the positives end. Some of the songs you hear were also present in leaks, but they feel watered down and if they aren’t tweaked to fit the christian theme of the album they’re cut entirely. The mix on this album sounds weird and rough and it’s lacking in content. It’s also hard to take seriously when tracks like “Closed on Sunday” are present which is lead with a really bizarre line. “Closed on Sunday, you’re my Chick-fil-a” and “You’re my number one with lemonade”. What? Come again? It’s even worse when you hear this dramatic guitar passage before the verse starts.
Thematically this album rubs me the wrong way too. Kanye portrays himself as a sort of martyr. Being pushed away by Christians. Not allowed into the big boy’s club, as it were. He creates an enemy for himself, an enemy that isn’t really there. In Kanye’s discography it ranks as his worst release. It doesn’t even feel like something he made. It lacks the charm, charisma, bravado of Kanye.

One of the biggest Kanye fans I know, a friend of mine, Hisham Zannoun shares the same sentiment, to him JIK is a, “Mediocre album that was a disappointment due to the bad rollout and massive amounts of hype surrounding it. Enjoyable but everything about it was mediocre.” Another friend, Guillermo Hernandez has this to say, “Bro he should have dropped Yandhi instead. I loved the leaks.” The consensus among the people I’ve spoken to seems to be that it didn’t live up to the hype. My biggest contention with this album is not its spirituality or it being gospel it’s that Ye seems to have lost focus. Kanye is an artist known for his ability to push boundaries and shock his audience. Shock me this album did not. At best it is a 5/10. Now excuse me while I listen to My Beautiful Dark Twisted Fantasy for the 15th time.