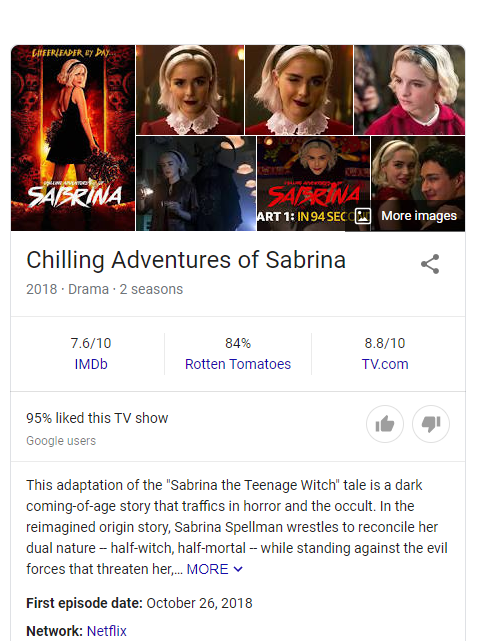 the Wikipedia icon for "Chilling Adventures of Sabrina" featuring the shows description, ratings, and the 3rd seasons poster as the main image

The past two seasons were well received and gained a strong fan following, the third season was also well received, but was faced with backlash on certain character choices.

Multiple new plot points were introduced throughout the 2nd season, such as Sabrina being the daughter of Satan and Father Blackwood (Richard Coyle) wanting to Jonestown the coven members. The Second season left us with Madam Satan (Michelle Gomez) becoming queen of hell, Sabrina (Keiran Shipka) trapping Satan (Luke Cook) in her boyfriend, Nick Scratch (Gavin Leatherwood), and sending him to hell. It ended with The Fright Club, Sabrina, Harvey (Ross Lynch), Roz (Jaz Sinclair), and Theo (Lachlan Watson), planning on how to save Nick from Hell.

Season 3 begins just months after the end of season 2, and it’s very clear Sabrina has been obsessing over Nick since, dedicating her time to rescue him from hell. The season is fantastic, it’s well written and does a good job of progressing the characters naturally. Each character is portrayed as an extremely talented actor. It has a healthy dose of Comedy and Horror, making it enjoyable for even those of the faint of heart.

Chilling Adventures of Sabrina introduces a Pagan group early on in the season. The show portrays Paganism as a vile and hateful group, this is incredibly inaccurate to modern day Paganism. Paganism is the belief in polytheism of pre-Christian gods. In fiction, Paganism is often portrayed as black magic, human sacrifice, and worshipping of the devil, while this stereotype does not fit Modern or historical Paganism, most pagans are regular people who just so happen to worship a god or god who fits their beliefs more than the main world religions. Not only is their painting of pagans incorrect, the coven turns to a form of paganism by the end of the season.

Despite the poor description of the Pagan, the season was enjoyable and interesting. It’s an important addition to the series and takes no detours in telling you the story of Sabrina Spellman. Even though it follows her for the full season, it reminds you of the imperfections of the character that is Sabrina. Overall season 3 is a worthy watch and incredibly well made.