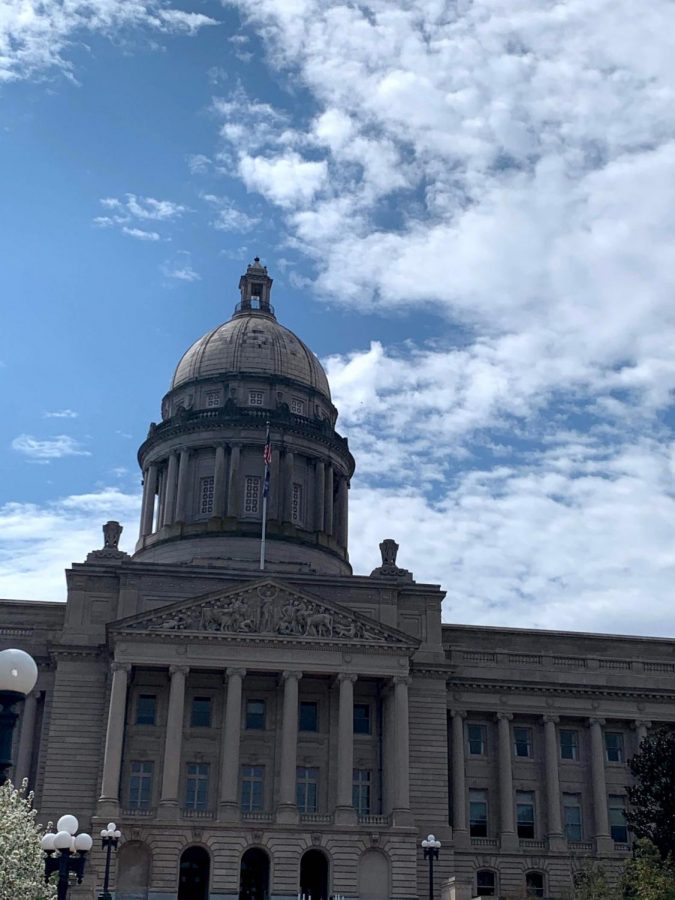 The front of the Kentucky State Capitol during the COVID-19 pandemic.

If you tuned into Governor Andy Beshear’s daily 5 o’clock briefing on April 15th, you may have heard something different.

About half an hour into the briefing, while Lieutenant Governor Jacqueline Coleman was speaking about the Team Kentucky fund, unintelligible shouting and horns could be heard in the background. The shouting soon escalated throughout the next thirty minutes into distinct words. Angry protestors had gathered around the capitol building and yelled at the governor through a small window in hopes of goading the governor into reopening the Kentucky economy.

Due to the COVID-19 virus, thousands of Kentuckians have been left unemployed. On March 22nd, Governor Beshear ordered the closing of all non-essential businesses, leaving only the absolute essentials to be open, such as grocery stores and pharmacies. Businesses have been closed for about a month now, and many are struggling to get by. To aid those who have been impacted by the closing of businesses, the state government has provided unemployment insurance. Despite this assistance, people still gathered to protest the temporary closing of non-essential businesses.

The protestors gathered in large groups, despite the governor’s reminders not to. During every briefing, Governor Beshear strongly urges the population to social distance in order to keep everyone safe, lower infection rates, and ultimately lower death rates within Kentucky.

Protestors held up American flags and shouted, “Let freedom ring,” which is a quote from Dr. Martin Luther King’s “I Have a Dream” speech. King wanted people from all backgrounds to be free, using this quote as a protest to prematurely open up the state and potentially harm thousands of people, is demeaning.

The protestors were mostly business owners that wanted their non-essential business to be reopened for their financial gain, even though human lives, which are arguably more important than finances, are at stake. This idea is extremely selfish, because those who support this idea are willing to put human lives on the line for themselves and their businesses. A group of epidemiologists have projected 13,000 deaths in Kentucky if people don’t follow the governor’s orders, which could very much happen if the state reopens prematurely.

One group seemed to overpower almost all of the protestors, yelling, “Abortion isn’t essential,” as a response to abortion clinics and other places that provide abortions being open as an essential business. As of 2017, there are only 3 clinics in Kentucky that provide abortions 1,500 nationwide. A large number of people disagree with abortion, and feel abortion clinics should be closed not only during the COVID-19 outbreak, as a whole. Those who oppose abortions are pro-life when it comes to babies, but why not be pro-life when it comes to the rest of the population? Gathering in a massive group, despite being advised not to by the government, to protest pro-life ideals doesn’t seem to be pro-life.

Throughout the briefing, Governor Beshear managed to stay cool and collected despite the shouts of angry protestors. When asked about the protestors, the governor said, “They want businesses open immediately. This would cause the death of Kentuckians…and remember, we’re following the White House guidelines. White House guidelines have asked us to take the steps that we have made, even though we made them oftentimes a little bit earlier in this. We’re in conformance with the suggestions not only of the White House, but of our neighbors.”

As the briefing concluded, the words, “Let freedom ring,” could still be heard ringing through the Capitol’s pressroom, and into the homes of many Kentuckians. The freedom of some can come at a cost for others.