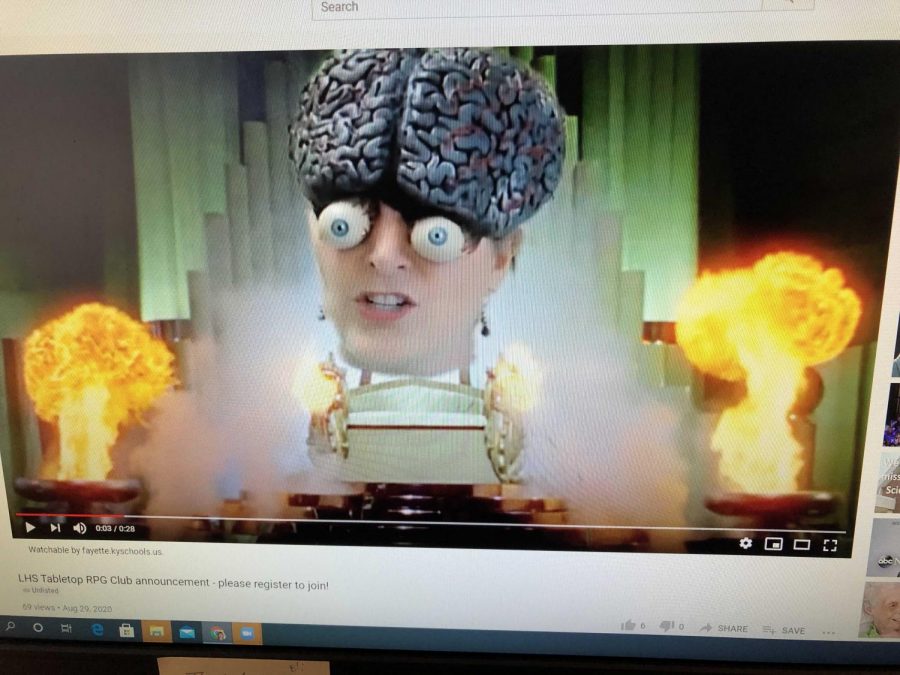 Lexington, Ky. Ms. Laurel Regnier, sponsor of the RPG club, invited students to the first meeting through a YouTube video.

RPG (Role Play Games) Club is a club that usually meets on Mondays after school until five o’clock, with the lovely Mrs. Regnier as the host. It’s full of groups of students, varying in size and grade levels, leading themselves in the wonderful, nerdy world of role playing.

Teachers are only present for supervision, other than that, the club is entirely student lead. Students sort themselves into groups, get their characters and plots together, and start on their own schedule. Members of the club learn a lot of independence and are handed a lot of trust, making this not only a club for game playing, but also a place to life skills they don’t even realize they’re learning. Overall, it’s a fun experience that allows students who might not fit the criteria of society to build a great community and enjoy doing things they love with no judgement.

Usually, all club members have to do is show up, sign in, break off into their groups, and continue to follow school rules. With NTI keeping us all apart, all clubs have had to rethink their meetings. It’s easier for the club to be in person, as group leaders tend to draw maps and lend books to people who are still learning. Plus, group members physically interact and create community, making club meetings more engaging. With no way to communicate but through Zoom calls and messages, a lot of the community that is usually created has been lost.

An active sophomore club member shares his insight on the club, including how it’s going with no in-person meetings. “RPG club is quite fun. Usually you just play DnD [Dungeons and Dragons] or other tabletop RPG games, but on occasions, when you can’t really do that, it’s just a time to chill and hang out with friends. I do remember there being a few times where our DM [otheriwse known as a Game Master, or group leader,] wasn’t there, so we just chilled and did something stupid for the meeting. DM’s describe the story, as you play through it. Usually the DM will draw out the map on a whiteboard, book, or table as we play the game. It gives us a better picture on what’s happening in the game, but, due to not currently being at school, it’s been a little bit harder to do that. We’ve usually just have to rely on our imaginations a bit more, and what little our DM can provide for us.”

The club member continued, “Playing DnD isn’t as difficult as you think it would be. In fact, the most issues we’ve had is, like I mentioned above, teaching new players. But, new players are willing to learn, so it’s not that hard to even teach them, [with everything you need to start being very easy to get or free online somewhere.] We haven’t run into many issues, though it’s much nicer to play DnD and other tabletop RPG games in person. But, we make due, until we can play in person again at school.”

While participating in the club, whether it’s online or in person, members can develop great skills that will serve them well later on in life. Group members can build skills of social interaction, creativity, inclusiveness, and broaden their imagination. Along with these skills, those who step up to lead groups and also grow in their ability to lead, teach, and assist. It’s hard to teach students skills in life when it comes to habits rather than academics, and thankfully, although it may not seem like it on the surface, this club is a great way to teach those skills.

When the everyday student hears about a club filled with role playing and games based on imagination, they’ll probably dismiss it as pointless and a waste of time when this just isn’t the case. While that is what the club involves, there’s much more to it. It takes a lot of dedication and hard work, that all goes towards pure enjoyment. Members learn a lot, whether they realize it or not. First and foremost, this club serves as an outlet, an escape, and an environment to have fun with no judgement.