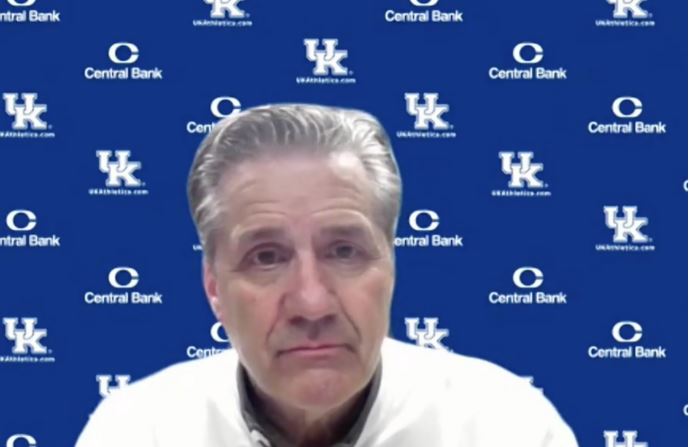 Lexington, KY.: John Calipari, head coach for the University of Kentucky's men's basketball team, speaks to the media after the game.

The Kentucky Wildcats (5-10, 4-4) found themselves on the wrong end of the scoring column yet again Tuesday, dropping their 10th game of the season once again to #9 Alabama (14-3, 9-0). This loss marks the first time Kentucky has been swept by the Crimson Tide in 32 years, and puts the Cats 4.5 games behind the SEC leader: Alabama.

To say the least, the game began terribly for the visiting Cats. The Tide drained their first five shots, three of those from beyond the arc, and jumped out to a 13-5 lead in the first four minutes. The Cats responded with an 11-4 run of their own and found themselves back in the game, and within a possession or two, for the last 10 minutes of the first half. At intermission Alabama led by three points after Jahvon Quinnerly sank a contested three point jumper at the buzzer.

The second half was tight, and the Cats even found themselves ahead with 4:37 to go after a three point jumper from Davion Mintz. However, with 3:32 to go, Herb Jones sank two free throws after an Isaiah Jackson foul. That would spark a 10-0 Crimson Tide run (18-5 to end the game) that effectively sealed the outcome. It just appeared that Kentucky couldn’t handle the pressure from a visible, yet limited Alabama crowd, who were the loudest they had been all night in those final four minutes of the game. In fact, after that Davion Mintz three pointer, Kentucky did not score again until a three pointer from Dontaie Allen with 42 seconds remaining in the game. That shot cut the lead to five, but by then the damage was done and Alabama had clinched the outcome.

“We passed up shots and then the toughness. We got the ball where we wanted to at times and then we didn’t have the toughness to hold onto it. Whether my guys [say] “They’re grabbing my arms!” dudes what do you want me to do? You want me to get thrown out again? You’ve gotta be strong with the ball.” was what a visibly frustrated John Calipari replied to a reporter after being asked about Kentucky’s late scoring woes.

“But let me say this about my team: they fought like crazy. We changed how we played [against Alabama]… we had our chances. We, again, got out-toughed.” commented Calipari later in the conference.

Despite the double-digit loss, it’s safe to say that this Kentucky team has improved from its previous effort against the Tide two weeks ago, and the final score was not indicative of how the game truly went. The Cats did a much better job of playing through grad transfer Olivier Sarr, and also found themselves with more opportunities in the paint in what was overall a disappointing but also vastly improved interior effort. Kentucky also found itself being quicker off the bounce, with the battle of the boards ending in a tie at 37 each. However, UK missed 20 shots in the paint, and turned the ball over 17 times, two eerily common themes this season that would yet again come to haunt the Cats in SEC play.