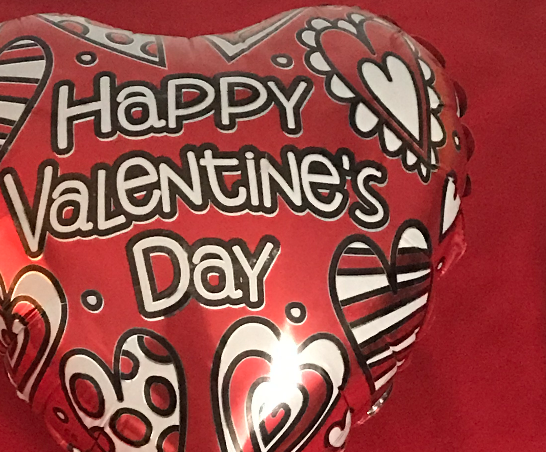 For Valentine's Day, many people buy balloons such as these, chocolates, and other gifts to celebrate Valentine's Day and show appreciation for their partner.

You’ve probably heard of Valentine’s Day, a “Hallmark holiday.” Valentine’s Day is a holiday in which people will express their love and affection for one another through acts of service, giving gifts/cards, and words of kindness. The origin of Valentine’s Day is not as clear cut.
Valentine’s Day is named for one of the Catholic saints by the name of “Valentine” or “Valentinus” that was killed because of his beliefs. According to Britannica, there are at least three possible saints in which Valentine’s Day is named after. The first is, “A priest who was martyred about 270 CE by the Roman emperor Claudius II Gothicus.” This priest was martyred due to his actions against the Roman Empire. History.com goes into more depth and says Valentine officiated the marriages of several young men. At this time of the Roman Empire, it was illegal for young men to get married, because Claudius II Gothicus (the Roman Emperor from 268-270) believed single men would be better off as soldiers than those with wives and families. Realsimple.com says this St. Valentine wore a ring with a Cupid on it–a symbol of love–that helped soldiers recognize him. He also handed out paper hearts to remind Christians of their love for God.

The second possible namesake for Valentine’s Day was a bishop by the name of Saint Valentine Terni. This Saint Valentine was also subject to death by Emperor Claudius II Gothicus. The third legend that the Catholic church recognizes is that Valentine may have been killed helping Christians escape harsh Roman prisons, where they were beaten and tortured. The legend goes: An imprisoned Valentine actually sent the first “Valentine” greeting after falling in love, possibly with the jailer’s daughter. Before his death, supposedly he wrote a letter signed “From your Valentine,” an expression still used today. It is possible that these three saints were in fact, the same person.

Another (arguably) possible origin of Valentine’s Day is Lupercalia, which was a pagan festival involving a ritual to increase fertility of women. According to History.com, Lupercalia was a Roman festival held in mid-February that celebrated the coming of Spring. Lupercalia consisted of Roman priests gathering in a sacred cave, sacrificing a goat, and then slapping the hide from the goat on the women and the crops. This was believably going to make the women more “fertile” in the coming year. Then the young women would have their names placed in an urn, in which their names would be matched with those of a bachelor. At the end of the 5th Century, Pope Gelasius 1 replaced Lupercalia with St. Valentine’s Day.

From Lupercalia, Valentine’s Day developed into a holiday of romance. During the Middle Ages, it was commonly believed in France and England that February fourteenth was the beginning of birds mating season, which add the idea that the day of Valentine’s Day should be for romance and is why birds (especially doves) have become a symbol of the day. February fourteenth could also commemorate the anniversary of St. Valentine’s death or burial. What truly solidified the connection between Saint Valentine and love was a poem by Medieval author Geoffrey Chaucer in 1381.
One of the earliest American Valentine businesses was run by Esther Howard who lived in Worcester, Massachusetts. She was the daughter of a stationary store owner. She asked her father to import fancy paper, lace, and other decor from England to make Valentines to sell. Esther was successful.

We interviewed Jeff Presley on his views on Valentine’s Day. Mr. Presley is 44 years old, and lives in Lexington, Kentucky with his wife and two kids.

Q: What do you think of when you hear the words “Valentine’s Day”

A: It’s a made up holiday. It’s not focused on any one event, it’s just a holiday about love.

Q: Would you say Valentine’s Day is overrated? If so, why?

A: Yes. It creates unnecessary pressure on individuals (single, dating, or married) to perform (or provide, however you want to look at it) in some way for their significant other.

Q: What do you think the true purpose of Valentine’s Day is?

A: To focus on romance and love between a couple.

Q: What do you know about the origin of Valentine’s Day?

A: Something to do with Saint Valentine.

A: Going on a date, celebrating romance and love by buying stuff that represents that

Q: Has your opinion of Valentine’s Day changed over the years? If so, how?

A: A little bit I guess. Since my wife feels a similar lack of performing/producing on Valentine’s Day makes it easier to ignore and not participate in the holiday.

Q: Does Valentine’s Day bring back any nostalgic and sentimental memories to you?

A: Yes. Elementary school putting a little valentine’s bags on my desk and eating those chalky hearts with messages on them.

Valentine’s Day contains remnants of both Christian and ancient Roman tradition. In addition to the United States, Valentine’s Day is celebrated in Canada, Mexico, United Kingdom, France, Australia, Argentina, South Korea, and Britain. It has transformed from a pagan festival celebrating fertility, to a commercialized holiday that costs people worldwide 27.4 billion dollars annually (according to cnbc.com).