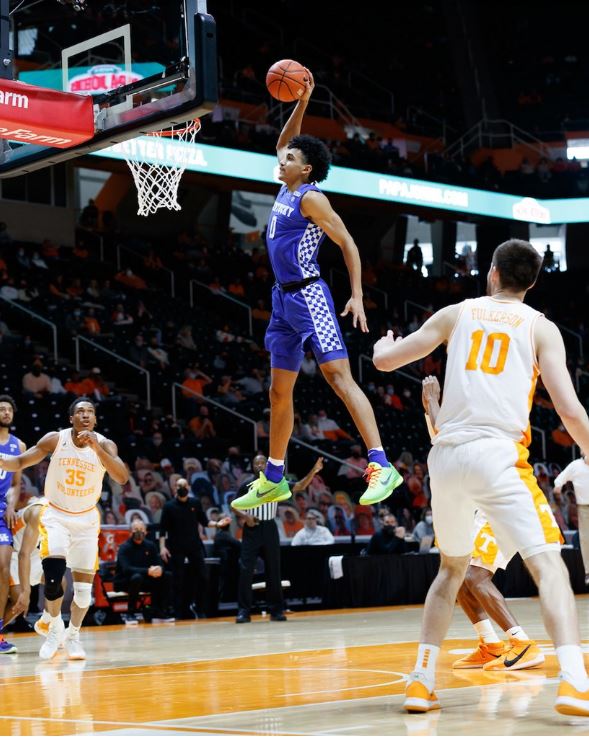 Forward Jacob Toppin (0) soars in the air for an emphatic dunk as John Fulkerson (10) and Yves Pons (35) observe from below.

The game began as a bit of a slugfest, but six minutes into the game, a Davion Mintz three pointer sparked a 5:10, 15-0 run to give the Cats a double digit lead, one that wouldn’t be relinquished over the final 30 minutes. Kentucky had four players score in double figures (Jackson, Sarr, Mintz, Brooks Jr.) and Keion Brooks Jr. topped off the night with a career high 14 rebounds. Tennessee had a rough afternoon offensively, making just 18 of 56 field goals, six of 22 from deep for only 55 points. The duo of Keon Johnson and Jaden Springer that combined for 50 points in the matchup between the two rivals earlier in the year, sunk only six shots, and only a combined 19 points to show for it.

SOMETHING HAS CHANGED
When you compare the performance earlier in the month that saw the Wildcats blow a 10-point lead, and lose by 11, to what happened Saturday afternoon, you will simply see two different UK teams. Everything had gone right for Kentucky in the opening half: made 60% of shots, 66% from deep (Mintz made all five three-point attempts), and held Tennessee to 30 first half points, up by 15 at the intermission.

Even beyond the Tennessee game, Kentucky has just looked plain better. The offense has been much more in sync, meeting or exceeding a 40% FG percentage in their last four games. Not just that, but Kentucky has not scored under 70 points (team average) in the month of February. Sarr, Jackson, and Brooks have established themselves as high quality rebounders on the interior, and the emergence of Jacob Toppin as a scorer and rebounder off the bench makes this team much more dangerous than its record appears.

The same can be said for the defensive side of the ball. Kentucky hasn’t had the best defensive performances in recent games, but entered the game top 30 in defensive efficiency per KenPom, and led the SEC in field goal percentage defense. Saturday was one of, if not the best defensive performance by the Cats all season. Tennessee had not scored under 60 points since Feb. 2 (52-50 loss at Ole Miss), and shot an underwhelming 32% in the rematch against the Cats. For reference, the Vols average 73 points per game, and a 44.5% average FG%.

ASSIST TO TURNOVER RATIO: X-FACTOR?
Anyone who has paid any attention to Kentucky basketball this season knows that the Wildcats have struggled with turnovers. In the game against the Vols Saturday, Kentucky was able to keep turnovers to a minimum, with only 11 over the course of 40 game minutes. As for assists, Kentucky had 12, making this game the ninth of the season that the Cats have had a positive assist to turnover ratio. Kentucky is 1-11 when closing the game with a negative assist to turnover ratio, and 7-2 with a positive ratio. If Kentucky can continue to emphasize playmaking and limit careless passes/stolen balls, that would eliminate one massive crutch that the Cats have dealt with all season.

KENTUCKY IS OFFICIALLY THE HUNTER IN THE SEC
Historically, Kentucky has always been the team to beat. Not just in the SEC, but in college basketball. The Wildcats still stand as the winningest team in NCAA Division I basketball, winning roughly 74% of games played since establishment. But when you think of some of the worst losses in the Calipari era (Robert Morris, Evansville, Kansas State, to name a few) all of them had one thing in common: These teams were the hunters, and wanted it more than Kentucky. No matter who the team is, anybody will scoff at an 8-13 record, especially when it comes around to the time of the SEC tournament.

All of the teams that one can argue are better than Kentucky: Alabama, Arkansas, LSU, Florida, Tennessee, Missouri have already most likely secured an at-large bid to the NCAA tournament. Those teams don’t have much to really gain or lose in the SEC tournament, and don’t need to win it, but Kentucky does, and the Cats are inarguably better than every team below them in the SEC (except for possibly Ole Miss). I would put it past absolutely no one for the Cats to pull a stunner in the SEC tournament and to win it. A wise man once said that even when things change, things stay the same, and I would be very scared to find my basketball team in the same region as the Wildcats come March. However, it is worth noting that of 17 teams with a record of or below .500 to make the NCAA tournament, none of them have made it out of the first round.

Kentucky is currently slated to play Florida this Saturday at 4 p.m. at Rupp Arena, but could possibly schedule a game against a mid-major team in the middle of this week.