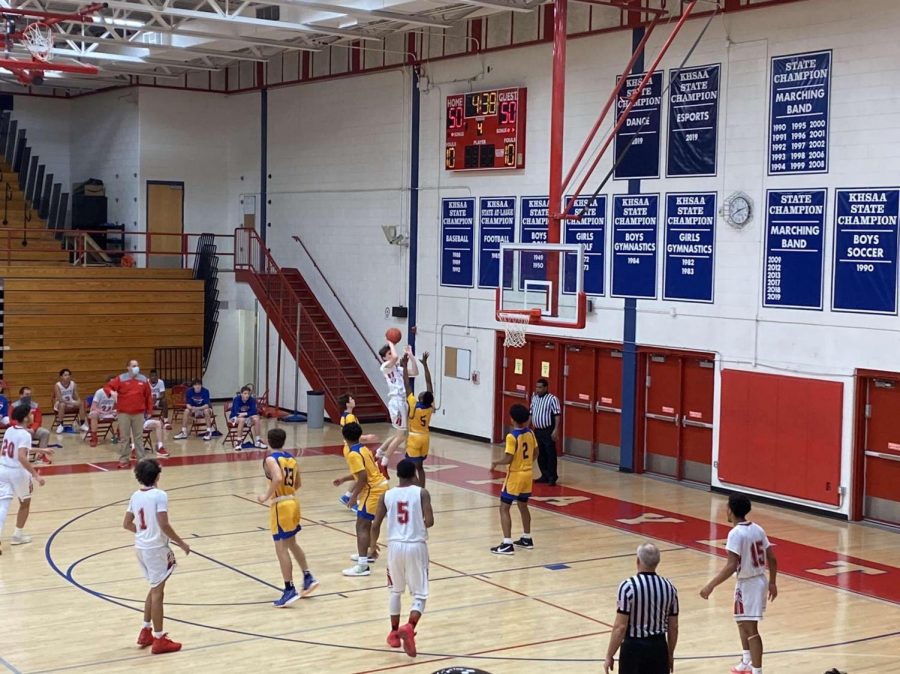 Campbell DeYoung (24) drives in for a contested layup against Kanye Henderson (5) as Kobe Blake (1), Torri Turner (5), and Iren Doneghy (15) watch from a distance.

It was a thrilling finish Tuesday night at Lafayette High School as the Lafayette Generals upended the Henry Clay Blue Devils, 58-52. The game started out in favor of the Devils, as they broke a 4-4 tie with a 11-3 run in 3:49 of the first quarter after a shoddy offensive start by Lafayette. However, a Nick Napier three pointer cut the Devils’ eight point lead (largest of the game) down to only five.

The second quarter was similarly close, with Lafayette outscoring the Blue Devils by 19-14 to trail 30-29 at the intermission. The Generals had fought back and found their stride, ending the half connecting on 10 of 20 attempted shots after only making 3 of 9 in the opening segment (7/11- 64% in the second quarter). As for the Devils, they matched the Generals’ production, sinking six of their nine shots and their lone free throw attempts, but found themselves limited by five turnovers in the quarter, making up nine of Lafayette’s points.

The third quarter was dominated by two of Lafayette’s big men: Abe Nelson and Torri Turner. In the first three minutes, Nelson logged a steal, a field goal, and an assist. However, after trying to draw a charge, he was assessed with a blocking foul, and replaced by Torri Turner at the five. In four minutes of play, Turner made both layups (for and-one opportunities) and grabbed a defensive rebound. His only crutch in the quarter was failing to convert either and-one opportunity. The duo combined for seven of the Generals’ 14 points in the quarter, as well as two rebounds. However, Lafayette still found itself in an uphill battle, down 46-44 and with 10 fouls in just one quarter.

The final period saw the game break open in favor of the Generals, as Henry Clay went ice cold in the segment, failing to make one of eight attempted shots. All six of the points they scored in that quarter were consecutive, however, off of Lafayette personal fouls. The quarter was primarily back and forth, but with 3:19 remaining in the game, Torri Turner checked in to the game, remaining hot from the previous quarter. Upon being subbed in, Turner made two consecutive baskets to give the Generals a four point lead with 2:46 to go, a lead that the Generals would be able to hold onto, and eventually win 58-52.

For Lafayette, it was a game of adjustments. After Henry Clay broke out to a quick start, The Generals brought on the full court press, a move typically seen as unorthodox in high school basketball. However, much to the credit of head coach Michael Mendenhall III and the rest of the staff, the pressing worked, and bought time for a struggling General offense to find their stride and to get back into the game. Mendenhall and the staff were also able to come up with an answer to Henry Clay’s 2-3 zone in the second half, playing through Turner and Nelson, to keep pace in the third quarter, and to finally break the game open in the fourth. The only knock on the Generals for their performance Tuesday night is their free throw shooting (12-21 for 57%). Free throws, especially in close games, have to fall if Lafayette wants to continue to win games and make a potential run for the district title. Beyond that, it was a spectacular performance by the Generals, who were able to maintain composure and poise even after an awful start and late game foul trouble made things look bleak.

As for the Devils, it’s hard to call the loss a “choke” or a “bad loss”. The largest lead of the game was in single digits, and very early on in the game. Clay shot well (17-42, 40%), made 14 of 17 free throws, and averaged a point per shot. The problem tonight is that the Devils are small, starting four guards and one forward compared to Lafayette’s two guard, two forward, and center scheme. When you’re that small of a team, and going against a fairly large and strong Generals’ squad, a 2-3 zone isn’t going to work, and the Generals were able to get in the lane and score. To their credit, the 2-3 zone is designed to limit shooting, and it did early on, but adjustments have to be made as Lafayette makes adjustments, which did not happen Tuesday night. When you are that small, you have to have an absolutely lethal shooting game. 40% is not bad by any means, but when the Generals are having their way inside, it just becomes a matter of toughness. Factor in how thin the Devils are (Bench outscored 2-22) and it can be concluded that while the Devils put up an excellent fight, they just couldn’t close tonight.

MOST VALUABLE PLAYER
The most valuable player of this game is undoubtedly Torri Turner. Coming off the bench, Turner made all five field goal attempts for 13 points (tied for game high with Nelson, and Henry Clay’s Brown and Blackwell), and nabbed three rebounds in the win over the Devils. Turner’s ability to create momentum, get inside, and draw late fouls against a razor thin Henry Clay squad. Performances like this, especially off the bench, is key when having to run big like the Generals did tonight when shots out of the paint wouldn’t fall. Turner is not a supplement to Abe Nelson, but a partner, and this game was proof of that statement.

The Generals will travel to Franklin County Thursday, meeting the Eagles at 6:30 p.m. The game can be watched on the NFHS Network.