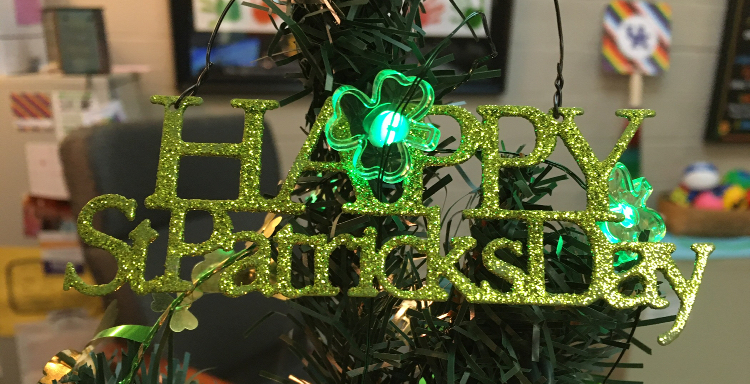 Lexington, KY. Ms. Bennington decorates a mini Christmas tree for every holiday in her office. At this time, it's adorned with Saint Patrick's Day decor.

St. Patrick’s Day is a holiday celebrating the life of St. Patrick, the patron Saint of Ireland, as well as a celebration of Irish culture as a whole.
According to Britannica, St. Patrick is a Catholic Saint who was born in Roman Britain during the fourth century. His birth name was Maewyn Succat. Patrick derives from the Latin term for “Father figure.” At the age of 16, he was enslaved and taken to Ireland, but later escaped enslavement. In 432, he chose to return to Ireland to help convert the Druids to Christianity. St, Patrick’s Day falls during the Christian season of Lent. By the time he had passed away on March 17th, 461, St. Patrick was responsible for establishing many schools, churches, and monasteries across Ireland. According to Georgia Public Broadcasting, St. Patrick is the official patron Saint of Ireland and its national apostle.
Timeline of St. Patrick’s Day Celebrations
The Great Potato Famine hit Ireland in 1845. Close to 1 million poor and uneducated Irish catholics began pouring into America to escape starvation. Prior to the Great Potato famine, most Irish immigrants in America were middle-class Protestants. According to History.com, the Great Potato Famine caused many poor Irish Catholics to migrate to America. These people were teased, ridiculed, and harassed because they were Roman Catholic, and not Protestant. When they would celebrate their Irish heritage on days such as St. Patrick’s Day, the media would portray them as crazy drunks, monkeys, and many more offensive images. President Harry S. Truman was a major factor in changing the US’s perspective of the Irish. In 1948, he chose to attend New York City’s St. Patrick’s Day Parade, which led to the tearing down of many barriers between the Irish and the rest of America.
One icon of the Irish holiday is the Leprechaun. The original Irish name for these figures of folklore is “lobaircin,” meaning “small-bodied fellow.” Leprechauns stem from a belief in fairies by Celtics. Leprechauns are normally depicted and described as small cranky men. History. com stated that Leprechauns are widely known for mischief and trickery. There is a holiday celebrating Leprechauns on March 13th, but many also dress up as Leprechauns on St. Patrick’s Day.
St. Patrick’s Day celebrates Roman Catholic feast day. The Irish have observed this day as a religious holiday for over 1,000 years. The celebrations became a way for the Irish to connect with their roots after they moved to America. More than 100 St. Patrick’s Day Parades are held across the United States. New York City and Boston are home to the largest celebrations. As well as the United States, St. Patrick’s Day is celebrated in Australia, Canada, Japan, Singapore, and Russia. Popular St. Patrick’s Day recipes include Irish soda bread and corned beef and cabbage because that’s the best they could afford then. Beer is sometimes dyed green to celebrate the day. In the United States, people often wear green on Saint. Patrick’s Day.
We took a poll of twenty Lafayette Students and staff to see how many people wear green on St. Patrick’s Day: