The Safety of Lafayette Generals 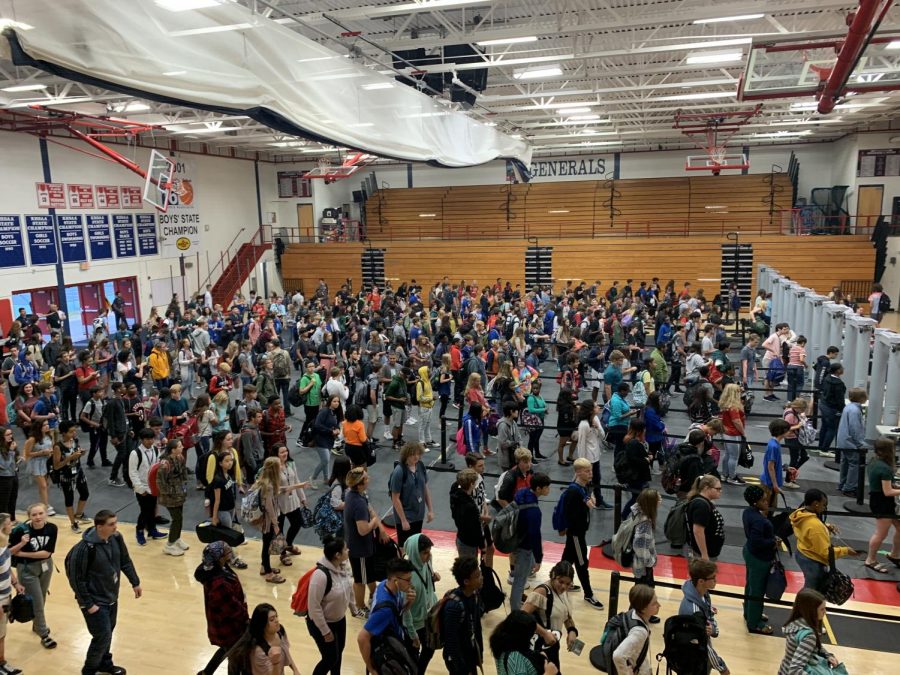 Lafayette Generals rushing through the morning metal detectors, trying to get to class on time. This photo was taken before the pandemic and students weren’t required to wear masks.

The safety of public schools has always been a big concern for parents and students. When parents send their children to school, they want to believe that they are sending them to a safe environment where no harm can be done, but how can the parents be sure, when the parents aren’t coming to the school them self? Parents ask themselves everyday, “Will my child be safe? Will there be threatening items entering the school building with my child? How do the safety precautions, such as door alarms and metal detectors in my child’s school work?”

Lafayette High School introduced metal detectors on September 12, 2019, to implement extra safety precautions, due to the uprising in school shootings and drug paraphernalia around the United States. The late Manny Caulk, the district’s former superintendent, made the decision to help execute safety defenses regarding the 10-point safety plan.

Considering Lafayette has a large student body, they were quick to implement these safety precautions during this time, as well as adding door alarms to every entrance and exit so that staff and police officers in the school can be alerted when people are entering or exiting the building without permission.

“So my stance on the door alarms and the metal detectors, well let me first say that when we implemented those items, they were a part of our ten-point safety plan and I really do think that they save our lives.” Sergeant Scott, a police officer who works at Lafayette High School, commented.

“With the era that we’re in right now, as far as incidents that have happened across the United States that have involved different types of weapons, the metal detectors are a great deterrent as far as keeping any type of dangerous instrument out of our school,” Sergeant Scott also commented.

Although going through metal detectors can take a lot of time for students and we want them to be on time for classes, officers and staff have found that when it comes to safety, time isn’t an issue. Teachers and staff don’t want students to be late for classes, but it goes without saying that students’ bags should be thoroughly searched no matter what. If something harmful is found during these bag checks, a police officer will be informed and go look into the situation.

Safety protocols can determine how well a situation can be handled in schools. We need certain protocols because of the many dangerous acts that have occurred in public schools. In the school system you can not have simple rules with young adolescents.

Safety protocols can include metal detectors and door alarms that Lafayette has placed throughout the school ”The door alarms- that’s an alert as far as if we have someone that comes into our school that shouldn’t be here. With the alarms going off, that alerts an adult near that door to go and see who has just left or come out of that door. So we have specified doors [without alarms] that should only be used and when the alarms are on and the other doors are being utilized it’s a deterrent as well as safety,” Sergeant Scott continued.

When asked what the protocols are when dangerous contraband is found, Sargent Scott responded with, “…if there is a dangerous instrument or deadly weapon that is brought to our attention, the law enforcement officer will go and confiscate that item and we would escort that individual to our office and do a search on them to make sure they don’t have any other items on them. But immediately we want to secure that item so that it’s not accessible to anyone.”

Most parents are worried for their child’s safety when sent to school, but in schools such as Lafayette there is no need to worry with all the precautions set in place. With so many safety precautions in place, it’s easy to see how much the Fayette County Board of Education cares about the students and staff’s safety in general.