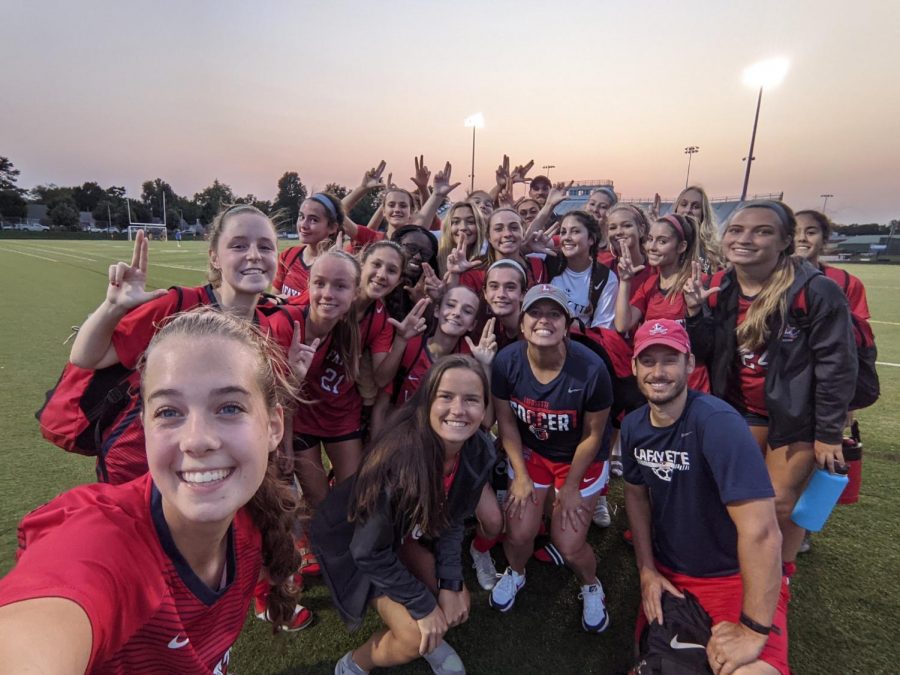 The Lafayette Lady Generals played two games this past week, matching the scores with 1 loss and 1 win.

The Lady Generals first paid a visit to their district rivals: The Lexington Catholic Knights, Wednesday night at the Joseph K. Ford stadium, being defeated in devastating fashion: 0-4.

Last season, the Lady Generals fell short to the Lady Knights twice, once in the regular season losing 0-3, and again in the district finals with a final score of a 0-2 vanquishment. The Lady Generals were coached then by Coach Taylor Roden, but the game on the dreary 22nd of September was advised by assistant Coach Jared Roden. Given that Coach Taylor was absent from the game, the team had different motivation going in. Sophomore and winger Campbell Tippey had this to say, “My mindset going into this game was that we had to work hard for Coach Taylor. We all knew this would be one of the most difficult games this year and we had to work extra hard.”

The goals were spread evenly between the halves, with the Lady Generals giving up two goals resulting in a halftime score of 0-2. The Lafayette Lady Generals could not acquire any goals on this rainy night. However, individual players still excelled. Tippey observed, “[Defender and Sophomore] Piper Smith, she stood out the whole game and stepped up when we really needed her to. She came into the game prepared for the challenge.”

Lafayette Goalie Poppy Jackson couldn’t stop the two of the shots in the second half, helping the Knights double their score by the end of the game. However, Jackson was able to block 4 out of the 8 shots fired by the Lady Knights.

The Lady Generals are already preparing for their next match against Lexington Catholic. Tippey reflected, “Hopefully next time we will all stay on the same page as each other and work to communicate as a team and build more confidence in each other. This was a very mentally challenging game and I believe next time we will be prepared and ready for the task at hand.”

Although the Lady Generals won’t rematch against Lexington Catholic until later in the season, they still had a chance at redemption playing against Connor last Saturday night. Senior and outside defender Kitty Gauthier stated, “I was nervous for the game, but I knew we needed to bounce back from Catholic. The morning of the game it truly didn’t feel like game day but once I got to the field I knew that it would be a good game.”

These ideas paid off in the game at Ishmael Stadium later that Saturday, with the Lady Generals bouncing back with a 3-1 win. The game kicked off with Sophomore Campbell Tippey scoring the first goal against Connor, and Sophomore Lily Simpson securing a second goal against the Lady Cougars. Connor managed to get one shot past Goalie Poppy Jackson, but she then went on to block the next twelve shots fired off by the Lady Cougars. Lily Simpson scored the final goal against the Cougars, leading the Lady Generals to a win.

When speaking of the player of the game, Gauthier remarked, “It’s hard to pick one player out of that game because we truly did work together [in] this game to win as a team. I think our MVP these past couple games has been Jaimye Cottongim, or “Coach Jaimes”. Even though she is injured, she is the heart and soul of the team on the bench. She encourages us to strive and be the best we can be.”

With this incredible redemption in the bag, they hope to continue their recent victory throughout the rest of the season.

The Lady Generals hope to claim a win against West Jessamine Lady Colts, with the game staged to take place Wednesday night at West Jessamine Stadium, kicking off at 7:30 p.m.