Happier Than Ever Album Review 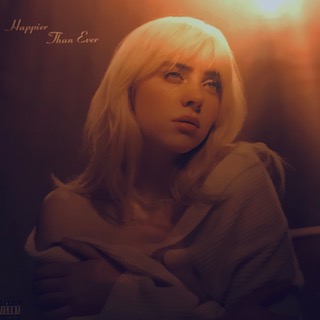 On Jul 30, 2021, world-renowned music artist Billie Eilish released her sophomore album Happier Than Ever. Charting Number One Album in 24 countries according to Wikipedia, the artist was thrilled. “I can’t even process it. [The positive reactions to the album] was the most fulfilling, most satisfying, and profound experience I’ve ever had with my music,” Eilish said in an Instagram post. Credible news sources such as Entertainment Weekly, Pitchfork, and Rolling Stones agree, rating the album 4 out of 5 stars. This rating is well deserved due to the effort the artist took to create a high quality album.

The album contains topics such as male toxicity, beauty standards, and the costs of fame (according to TIME). I agree with TIME and I also believe that the album comes from the heart of the artist. In the song “Getting Older,” Eilish touches on the pressure of fame. “Things I once enjoyed, just keep me employed now.”

“Your Power,” the third single released before the album, spotlights an abusive relationship. “She said you were a hero/You played the part/But you ruined her in a year/Don’t act like it was hard.” The album also includes a monologue directly addressing body image in “Not My Responsibility.” Eilish has the ability to create music that represents her as an artist while writing powerful lyrics that represent her as an individual.

According to the New York Times, “Happier Than Ever”, the album’s hit song, is one of the most exhilarating moments in Eilish’s career. The track unleashed a wave of emotions “Always said you were misunderstood/Made all my moments your own/Just {explicit} leave me alone,” coming off as a loud, rock ballad. The song was my personal favorite because it reached a level of musical talent that the artist had not reached in previous albums.

Happier Than Ever has jazz, folk, rock, and pop elements throughout each song. Ranging from soft and soulful–”Halley’s Comet”–to rock and catchy themes–”Happier Than Ever”–the album is truly something to be proud of. Produced and co-written by Finneas, her brother, the album was quoted as “the biggest test yet,” by the Wall Street Journal. I believe one of the main reasons the album is so good is because Eilish’s brother (Finneas) produced it. In my opinion, he is one of the most skilled music producers in the industry. Eilish refuses to work with anyone but her brother to produce her music. “Billie reached vulnerable parts of me,” said Lafayette Junior Collin Harrison. “A few of her songs such as ‘Getting Older’ made me sob. Happy tears.”

Billie Eilish and Finneas have once again created an album charting number one all across the world. Eilish spread awareness about important topics while creating well-produced music, and critics and music lovers alike are pleased. With its impactful lyrics and unique and high-quality music, listening to Billie Eilish’s album, Happier Than Ever is worth it.