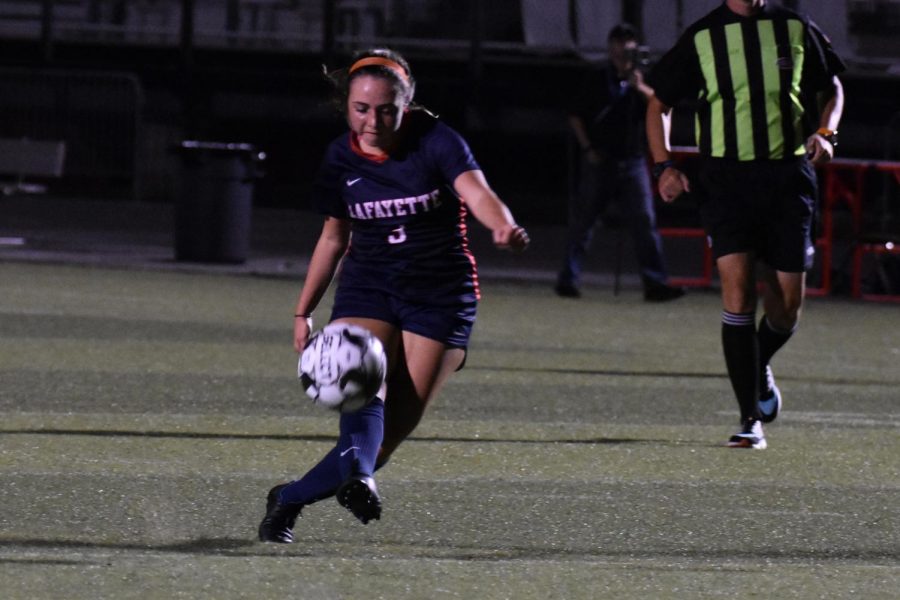 The first goal came in the opening half when sophomore and winger Campbell Tippey sent an amazing strike into the net from the corner flag in a brilliant individual performance. The Generals held the lead into the second half, securing the halftime advantage, 1-0.

Despite the halftime advantage, the game remained competitive, with the Lady Blue Devils leveling the scoreboard to open the second half. The Lady Generals had a response of their own, creating a delightful passing sequence to regain the lead. Sophomore and midfielder Brooke Dawahare laid off the last pass to Sophomore Ally Robertson, who slotted the ball past Henry Clay’s goalkeeper, Zoe Tinch.

The Lady Blue Devils weren’t ready to surrender, however, and would successfully equalize minutes later. The whistle blew to end regulation time. After eighty minutes, the Lady Generals and Devils locked in a 2-2 score. The gridlock would result in not one, but two five-minute periods of overtime.

The overtime was a nail-biting event, as each team came out with a new fire. The teams were so well matched, leading to a suspenseful penalty kick shootout. As some would say, they were “so close, but yet so far.”

Henry Clay kicked first, shooting the ball into the top right corner. Goalkeeper Poppy Jackson dove correctly, but was a mere fingertip away, putting the Lady Blue Devils ahead on the scoreboard. Immediately after, Abby Peck evened the match, securing a ball in the right corner. After Henry Clay scored again, Campbell Tippey smoothly passed the ball into the bottom right corner of the net. Following another point to Henry Clay, Marianne Gebb’s shot was blocked by Tinch. If Henry Clay continued their perfect streak, the game would be lost. Alden Nusbacher calmly made what would be the last shot for the Lady Generals. Suspense edged the final goal by the Lady Blue Devils, but the Lady Devils just barely made it past Jackson, heartbreakingly concluding Lafayette’s season.

Senior and Center Defender Abby Peck states the player of the game was, “Ally (Robertson) because she scored that second goal after Henry Clay scored that first goal. That really gave us a boost of energy. She came in off the bench and just put one away, and that really really helped keep us in it and kept all of our spirits high going into overtime. I think she really killed the game, she brought the energy and the boost that our team needed.”

Peck looked back at her years as a Lady General in an interview with the Times, and said that a lesson she learned while with the Lady Generals was, “learning the lesson of finding that balance and having a positive attitude on the field that also reflects who you are as a person.”

Peck also had a message for the underclassmen: “Work hard. Work for your teammates. Not everything is always about you or how you perform because in the end it’s a team sport and working for your team is the most important thing. If you mess up, you can’t get your head down and blame yourself because there are still ten other people on the field that need you to be in that moment.”

The loss to Henry Clay is a negligible blemish to what was an outstanding season for the Lady Generals. The Lady Generals ended their season winning eleven games, tying two games, and losing seven games. The future is bright for Lafayette Girls Soccer as new people join the program, junior varsity players move up, and talents like Brooke Dawahare, Campbell Tippey, and Lily Simpson continue to shine.