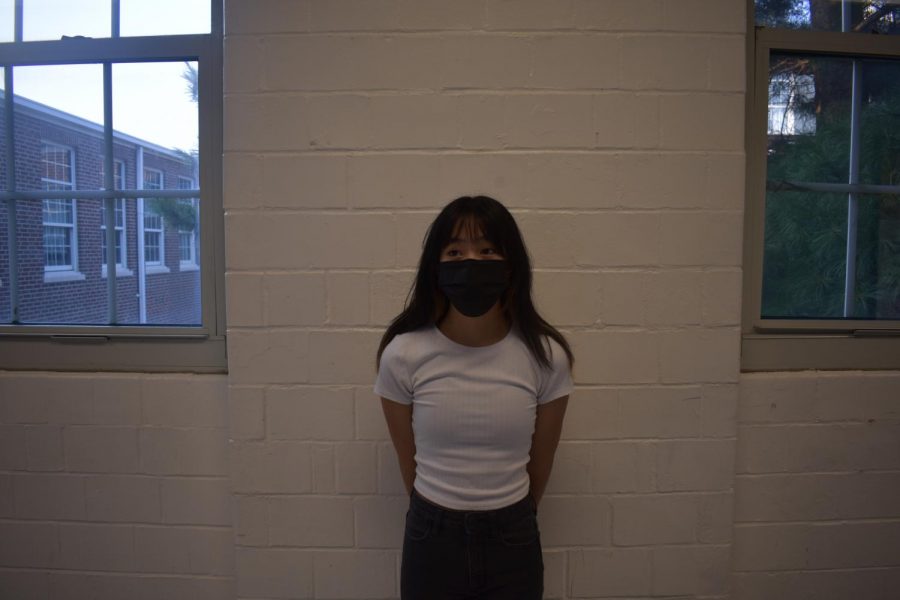 Emma Brown, senior at Lafayette High School, wearing an outfit that is deemed as in dress code.

The Lafayette High School dress code is simple. No tops with straps, no hats or head coverings that limit the ability to identify the student, shorts and shirts must be fingertip length, clothing must cover the back, cleavage, midsection, and top of the shoulder area, whilst covering all undergarments. All of these guidelines are created and enforced by the school’s administrative office. None of these rules are mainly subjective to men. Found in Lafeyette’s expectation video on youtube, Fayette County says, “that the dress code is in place so no one is distracted from their work.” How is the female body a distraction? Women have very little freedom compared to the male students when it comes to the dress code.

“Students’ dress that presents a danger to self or others or can be reasonably expected to cause a disruption will not be accepted.” says the . The Student Handbook underlines the negative impacts of expressing yourself through clothes. It describes us as being a danger and destruction to others just by wearing a certain outfit. The dress code has evolved in some ways over the years but there is still room for improvement. Culture, fashion and views are changing and evolving in the 21st century and the dress code needs to change too.

When the school referred to the dress code, they talked about dressing for success, according to Lafayette’s Expectations Video. But what if dressing for success also impacts the rights and freedoms of women and girls in this school? Women and girls in this school are limited to the outfits they can wear and this does not respect their freedom. Is this defined as success? Based on personal observations, male population in this school does not have to suffer the consequences of being dress coded as frequently as women. Males can wear muscle shirts while females can’t wear shirts that reveal their shoulders.

“Why is there a dress code in the first place?…The dress code definitely targets the female population at Lafayette too, you see little to no enforcement for guys and I don’t even think I’ve met someone who is a guy that’s been dress-coded.” a female Lafayette Student said. We asked a couple of students for their opinions on the dress code. As we can see she feels very strongly that the dress code is unfair. However that does not mean men don’t feel the same way towards the dress code.

“The dress code at Lafayette high school has been used for decades to shame women. These rules are sexist and demonize the female body which is not inherently sexual. In addition people with a larger body type face more punishment for dress code.” said a male Lafayette student. Even the male students in this school believe that the dress code put in place is unfair and should be changed.

No tops with straps, no back, cleavage, midsection or shoulder tops. According to the school administration, this is “dressing for success.” Apparently, this is dressing for success when women in this school are stripped of their freedoms because of a “safety issue.” The dress code has come a long way over the years but it is still sexist. It is still oppressing women and their rights as humans. Their rights being equal to men’s rights. It is no surprise that females in this building are dress coded more frequently than males in this building. The dress code does not respect female’s rights to freedom of expression. Citizens of the United States have a right to freedom of expression based on article 10 of the constitution, and for that reason, the dress code should be changed. Females in this building should have the same freedoms as men in every aspect, including the dress code. Now is the time to change the dress code. Now is the time to act.