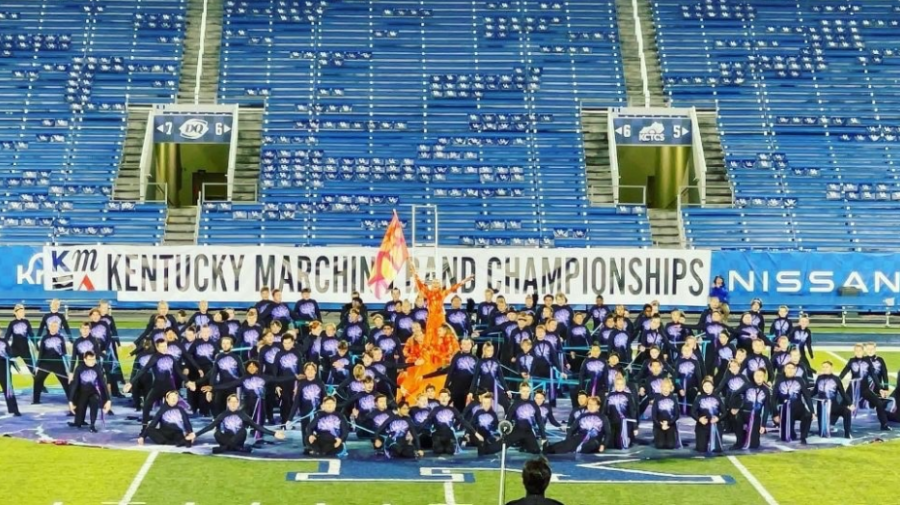 Jade Fitch, pictured in the orange, waves a flag during the post show of the Lafayette Band's State performance at Kroger Field

The day that the Pride of the Bluegrass, Lafayette Marching Band had been dreading and anticipating was finally at their doorstep. It was time for the Kentucky Music Education Association (KMEA) state finals marching competition. After its cancellation in 2020 due to the pandemic, the band was eager to get back on the field. However, getting there was not without hardships; every day students and staff members worked on improving the show with an estimated 288 to 336 spent hours on practicing. The KMEA state finals with bands competing from every part of Kentucky was the perfect opportunity to show why the Lafayette Band was called the Pride of the Bluegrass. Although doing so was no easy task, the Lafayette band was a 5A band based on its size, meaning it had to face equally capable bands such as Madison Central, Larry A. Ryle, Central Hardin, and others.

On October 30th at 7 AM the band was up bright and early for their last day of the season. Everyone was determined and ready for a good rehearsal. However, the rainy weather had other plans. As a result of this, the poor practice runs impacted the morale of a few students (though not enough to stop them). Rehearsal continued and was moved inside the school building as the time to move to where the semifinals would be held arrived. At 11 AM the Lafayette band made their way to George Rogers Clark High School, where they held the semifinals competition. The rain had cleared up just in time, and the students gave it their all, winning first place and securing a spot in the finals. They defeated Madison Central High School by more than three points. After hearing this, the morale was at an all-time high; the band felt shocked and unstoppable by this news.

The students headed back to Lafayette, where their motive and determination only got stronger. After a cold yet good rehearsal, they went to have dinner for their last meal together for the season. They shared laughs and emotions over the food and candy they had–given to them by all the staff members and volunteers that had made their goal of winning that much more possible. A video by said staff members and volunteers lifted everyone’s spirits to levels never seen before. Motivational speeches were given spanning from Meteorologist Chris Bailey to former Lafayette Band Director Smith, causing tears and laughter from the students and volunteers alike. Mutually everyone shared the sentiment that they were going to State Finals with everything they had.

At 10:30 PM the time had come for the band to walk onto the massive Kroger Field where the judges made the final decisions. After yet another warm-up, the band was more ready than ever to get on that field and perform their last ever run of their 2021 show Peace of Mind. Lafayette’s 2021 show piece of mind displays musical and visual representation on how one deals with personal conflict and resolution through the connection of the band and gaurd.As the journey for inner peace continues the music gets calmer as well as the band and guard’s connection getting stronger as the emotional transformation happens.

Laffayette would be competing against George Rogers Clark, Central Hardin, Larry A. Ryle, North Hardin, and Madison Central. They took the field and performed their final run of what would be their last journey for inner peace and as the run began with the dark and intense movement one to display the emotional transformation of what felt like the show and the band; it ended with a reassuring explosion of applause from the packed stadium. Once they walked off the field, there was not a doubt that they had put in their best effort in the show.

It was 11:30 PM, and the judges announced the final awards. The band waited eagerly with great anticipation for the announcements of the results of the 5A bands. The Grand Champions for each class: Owensboro Catholic High School for 1A, Beechwood Highschool for 2A, Murray High School for 3A, and Anderson County Highschool for 4A. The announcer reached the 5A bands’ awards with tension at an all-time high. All the students gathered with their hands together–waiting to see whether the results of their hard labor had paid off. The nervousness kept on rising higher and higher as they listed off the placements. Central Hardin was 6th, George Rogers Clark was 5th, Larry A. Ryle was 4th, and North Hardin was 3rd. Two bands left: Lafayette and Madison Central. What felt like an eternal silence: every band member held each other’s hand in anxiety for what was coming. Suddenly, the announcement of second place being Madison Central echoed across the dome-shaped stadium. They announced the Lafayette Band as the proud Grand Champion of the 2021 KMEA State finals.

Once they told the bands to break formation, every one filled with emotion. Parents, students, and volunteers alike were in the joy of what happened. Every student received a medal, and most importantly, they handed the first-place trophy to the drum majors. Everyone was crying, taking photos, in shock, singing, and having the time of their lives. A speech by director Mr. Bishop told everyone that the reason they had gotten there was because of the hard work they had put in. There was yelling loud enough to be heard in the stadium as everyone enjoyed what would be their final moments together for the season.

After a long day, it was finally time to go home and return as the victors obtained their 22nd State Championship and a lot of memories and experiences along the way. At last, the band obtained peace of mind.