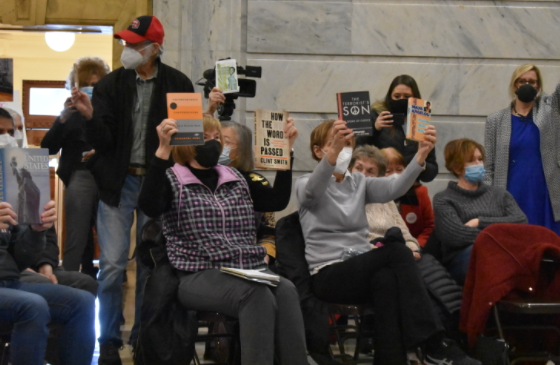 Rally attendees hold up books they fear may be banned with the passing of HB 14 and HB 18.

FRANKFORT— On Wednesday, the Capitol rotunda floor was flooded with students. In their hands were signs reading, “Teach honest history,” “Diverse representation in classrooms matter,” and “Let teachers teach.” These students, who have come from all around Kentucky, have missed school to protest the passage of House Bills 14 and 18, dubbed the Anti-Critical Race Theory bills.

Critical race theory or CRT is an idea that explains how racism is embedded in our government and social institutions. While CRT is typically taught at a collegiate level and not to K-12 students, conservatives throughout the country have inaccurately used it as a term that describes any efforts to explore culturally relevant topics, such as race and creed.

If passed, these bills would prohibit educators throughout the state from mentioning topics that could potentially teach students that one race is “superior,” or that an individual is “inherently oppressive” whether they know it or not, based on their race, sex, religion, or class.

Educators have argued that both bills are so vague with what is or is not allowed, that they feel they would be forced to to avoid most topics, particularly historical, that involve race or racism. Educators also argue that if HB-18 were to pass, colleges could lose their accreditation and ability to receive federal aid.

While both bills were pre-filed in June 2021, neither have moved forward in their legislative process. Despite this, students arrived at the Capitol to protest.

The rally opened with a speech from Dr. Rebecca Powell, who urged that we don’t ban books that cover these topics and teach history as it happened.

Dr. Powell asked attendees to call out books that could possibly be banned with the passing of these bills.

“To Kill a Mockingbird,” one attendee called out. “American history textbooks,” called another.

When asked if their race or ethnicity was important to their identity, six in ten students who responded said they “agree” or “strongly agree.” With students of color, that number was nearly nine in ten.

Upreti continued to share that although an overwhelming amount of students consider their race and ethnicity to be a vital part of their identity, one third of students reported that their curriculum and classroom experiences “rarely” or “never” reflect the histories and present the realities for students of different races or ethnicities.

“We cannot afford to graduate with one hand tied behind our backs, unable to navigate a world that’s so different from the one in which our parents and politicians grew up in. The ability to better understand diverse perspectives and people is an essential civic skill,” said Upreti.

Following these remarks were essays written by TaMyra Johnson, a senior at Fern Creek High School, and Tyler Terrell, an 8th grader at Leestown Middle School. Both students shared their personal experiences from growing up as students of color and urged the importance of not sugar-coating what we learn in schools.

“History is often taught in a way that gives students the impression that we jumped from one major event to the next, and that everything worked out in the end. But that is not how history works,” said Johnson. “We can’t cherry-pick the parts of American history we learn, and the perspectives we hear.”

The rally concluded with a performance from a group of students called Mighty Shades of Ebony.

“Overlook our culture, that’s a microaggression,” sang the group, ringing through the marble halls of the Capitol.