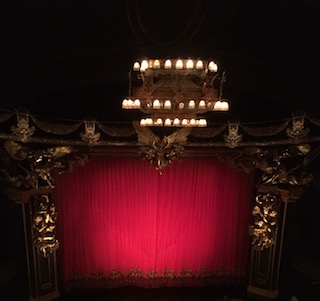 Before Winter Break, auditions were held for SCAPA’s long anticipated spring musical, Mamma Mia. Now that the directors have finalized casting, students are preparing for after school practice, starting in February.

When asked about starting rehearsals, cast member Lauren Clay Sampson (Sofie) says she’s excited. This is her “second show at SCAPA and the first was canceled for COVID,” highlighting the impact COVID had on the theater program. But the show must and will go on.

Looking towards the 2022-2023 school year, cast member Ben Ingram (Sky) encourages students to audition for the next year’s school musical. “You should totally do it. It’s going to be so much fun!” he says “Whether [or not] you think you might not have talent. I didn’t think I did and next thing you know, I’m Sky!” he says, showcasing the fun and surprise of being in a school musical.

The show, an instant success, premiered on Broadway in 1999 with a 14 year run. This makes it the ninth longest running show in Broadway history. The original broadway show is 1 hour and 48 min on average, with 25 singing performances. According to the New York Times, Mamma Mia! is the most unlikely hit ever.

The show spotlights Donna, a hotelier in Greek Island, preparing for her daughter’s wedding. Her daughter (Sophie) makes an attempt to find out who her father is by inviting each potential dad to the wedding. The show is to be performed at the Opera House sometime in the Spring. Cast A and cast 1 are two different casts alternating between shows.

The cast is due to open sometime in the spring and tickets will most likely go on sale then. The show will be performed in the opera house, a stunning venue for a stunning show.