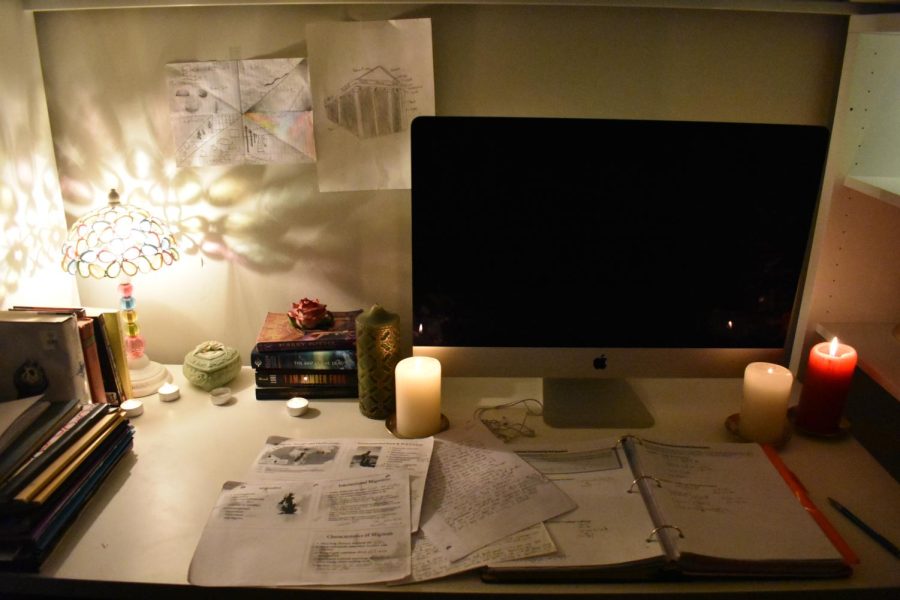 A student's personal desk and workspace.

The second semester of the school year often feels like a fresh start for both teachers and students alike. The grade books are wiped clean, the new year has just begun, and everyone is returning fresh after winter break. Most everyone resolves to do better somehow in the second semester, but according to Traci Cornett, a psychiatric nurse practitioner working with Mountain Comprehensive Care here in Lexington, a lot of people move forward without a clear action plan or the discipline to carry through, and that leaves them right where they left off. “I’ve seen students feel hopeless,” Cornett says. Especially with the pandemic, “it’s taken until now for some kids to get a sense of direction.” So is it really possible to turn things around in the second semester?

The first thing to do is reassess priorities. If this semester you prioritize the exact same things you did last semester, the results are going to be the same. The things you prioritize, and thus, view as most important, are the things that you’re going to put the most time into. If you’re behind in your work and only have one weekend before the test, going to see that movie is going to put you in a crunch for time where you freeze up and panic instead of actually being able to focus.

One way to make sure you’re maintaining priorities is to track your progress. According to National University, there are countless apps like Evernote, Remember the Milk, or Any. do that are designed for this exact purpose. For someone with lots of commitments, having a place to spread it all out can be immensely helpful. Another way to track progress is to make lists on paper. Some people love the feeling of checking off boxes on a list to get that sense of accomplishment. The author does the reverse of this, writing down accomplishments after they’re completed so the list will grow.

Cornett also provides insight into the ways she sees students succeed in putting their priorities into practice. She says that “The ones who do better are the ones who have a support system somewhere.” Having a group of people you can rely on to support and help you if you need it is very important for changing your habits to prioritize something that will be better for you in the long run, like schoolwork. Cornett says that another way she sees students successfully reprioritizing is when they’re motivated in another area of their life. Be it a club, sport, an after-school job, or just feeling hopeful being back in person with activities, motivation outside of school establishes a routine and a positive outlook, so it becomes a lot easier to be motivated when it comes to school as well. “Productivity breeds productivity,” Cornett says multiple times.

There are also many ways to help the process of studying, like setting up a study space using a checklist from Maryville University. Having one place you go to to work will essentially train your brain to be productive while there. Drinking plenty of water while working will help keep your brain clear and awake. Consistently playing some instrumental music designed to help you focus, like Lofi Girl, will also help to set the mood and can have the same effect as always working in the same place. And while it may seem obvious, make sure to hide your phone while working.

So, consistent and hard work is the most important thing? Kind of.

Just like how rest is only effective when paired with hard work, hard work is only effective when paired with rest. Setting breaks for yourself every 25-40 minutes while you’re studying will help keep you focused and fresh. According to Social Triggers, they even help you make better decisions. Beyond the fact that human beings are not designed to work for 8+ hours straight, they’re also not designed to have work be the only thing to look forward to. Setting up little rewards for yourself when you meet certain goals is important, as it acknowledges and celebrates the hard work you’ve done. It also reminds you to give yourself a break.

Traci Cornett emphasizes the importance of a good sleep pattern, saying that that is the biggest game-changer for teens. When you prioritize your time well and go to bed early, you wake up feeling more refreshed and motivated to be productive. She says this often happens in teens with after-school jobs, because they come home exhausted and go to bed, which then makes them wake up feeling refreshed. Again, “productivity breeds productivity.”

Something else that could be helpful is to schedule time for yourself. Most people schedule a time to do assignments, then procrastinate it and end up not only ignoring their assignments, but neglecting self care. Instead, try doing the inverse, and schedule out time for self care. No matter what, that time is for you, away from social media, to do whatever helps you rest. Maybe it’s reading, or playing video games, or having some tea and talking to friends. Whatever it is, sit down with intentionality and do that thing. The problem most people face is that they don’t put in time for themselves. They try to take on too many things, and say they can rest when it’s over. Your body knows you aren’t meant to work that way, so it revolts, demands rest in whatever way it can get it, and that’s how you end up procrastinating while never feeling rested.

In scheduling time to relax as a priority, you are giving yourself the thing you need and would end up doing anyway, but you’re doing it intentionally. You’re spending your time in a more valuable way. And then when it is time to start on the work, you don’t feel as though you’ve been robbed.

All tips and tricks aside, the main factor in regaining motivation is you. Motivation is great, but it isn’t consistent, so at a certain point you’re going to have to trade it over for discipline. Cornett gives one final tip— “Find the thing that drives you.” Some people are motivated by goals, sitting down to do x task, then y task after you finish. Some people are motivated by time, saying you will work for x many minutes before taking a break. But in the end, you are the moving factor that is going to change that grade. You are the thing in between something being assigned and being back on the teacher’s plate for review.

You have to take a deep breath, look around at what you have to work with, and say “let’s do this.”