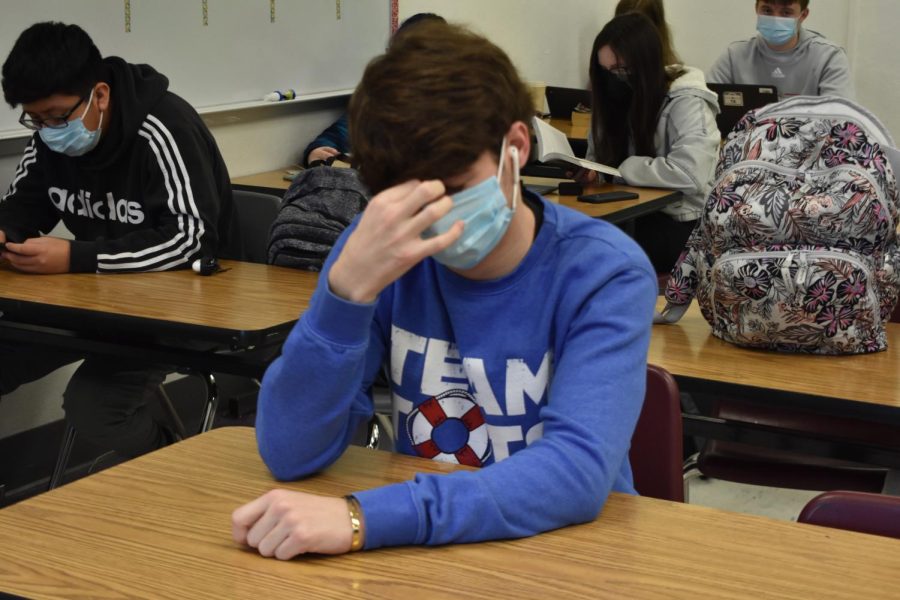 Lafayette junior Josh Smith listening to the new The Weeknd album, Dawn FM and agonizing over the mediocre songs.

On January 7, 2022, singer-songwriter The Weeknd released his fifth studio album to date, the experimental and conceptual Dawn FM. Coming not too long after his preceding fourth album, the critically acclaimed pop masterpiece After Hours, which dropped March 20, 2020, Dawn FM has proven thus far to be a commercially and critically successful effort, adding to the Weeknd’s long rap sheet of solid releases.

In many respects, Dawn FM earns what it has received; however, in others, it lags far behind the positive critical assessment fans and reviewers have laid upon it. To start with the positive, we can start with the album’s opener, “Gasoline.” To put it simply—this track goes hard. It’s probably one of the most solid openers of any album in recent memory, pure musical euphoria.

Nevertheless, the style The Weeknd imbues vocally on this track serves greatly the album’s New Wave influences—another thing that elevates “Gasoline.” Instead of carrying the more punchy and bubbly vibes of many contemporary New Wave-infused tracks, it goes a much heavier and more contemplative route, a la “Just Like Heaven” by aforementioned artist the Cure. And because of that, it’s a type of song that hasn’t been heard in a long time, and is better for that.

To sing one last praise of the song is how it takes all of this, and effectively fuses it with elements of millennial pop, such as through it’s vocal echoing during the chorus and spiraling synths that only serve to add a smattering of sweetener to the track, like a lemon to a glass of water.

Moving on from “Gasoline” is “How Do I Make You Love Me?” This track goes for a bit of a darker atmosphere than “Gasoline”, and drops the vocal manipulation. It sounds like the theme song for a mad scientist in a rejected mid-1980s Tim Burton comedy-horror-musical flick, which is why it’s a pretty solid track. Not my favorite, but appreciable for those qualities.

“Take my Breath”, upgraded from it’s initial release as the album’s debut single, is an outstanding track that acts as a bridge between the album’s islands of retro throwback. Fusing New Wave and disco, it’s a thundering dance track that comes over like a storm cloud over a gothic castle, complete with pounding and wailing synths that feel like you’re in a laser tag arena where an actual war is being fought.

All in all, it’s a fantastic track, and the momentum it’s generated is only furthered by what comes next— “Sacrifice.” While this may be a premature statement as it’s only February, “Sacrifice” is probably the best single-release of the year thus far. With it’s demanding synths that harken the darker tone of “How Do I Make You Love Me?” and “Take My Breath”, and the return of the New Wave-inflected vocals of “Gasoline”,”Sacrifice” is the best of both worlds. Also in the mix, are the influences of Prince and Michael Jackson, and not influences that are merely influences, but rather influences that show that the Weeknd is ready to succeed the two. It’s overall a fantastic track.

Following a brief interlude that I’ll cover later is “Out of Time”, which samples a genre of music that is bursting into the Western consciousness in a similar, albeit more eclectic vein to K-pop; Japanese city-pop. It perfectly encapsulates the essence of the genre, with it’s interpolations giving the song a relaxing, loungey feel that gives you all the 70s and 80s throwback vibes without the pulse-quickening synths or thunderstorm-darkness of previous tracks.

Now, if Dawn FM were an EP, and this was where it cut off, it’d very easily be a 9/10 record but there’s nine more tracks. And that’s what keeps Dawn FM from greatness. Instead of building upon the sound of past tracks, which while definitely making clear their influences, mark a nice era of experimentality for the Weeknd, Dawn FM gets lazy.

“Here We Go Again…” and “Best Friends” are some of the weirdest and worst tracks of the Weeknd’s entire career. With stilted and awkward lyricism mixed with meandering instrumentals, the drop off in quality from what came after versus where we are now is the size of the One World Trade Center. Remember the “Just drop it?” post the Weeknd put out on Instagram before the release of this album. Yeah, that wasn’t a good idea, given these tracks’ quality.

“Is there Someone Else?” and “Starry Eyes” are perfectly serviceable, albeit forgettable tracks. “Every Angel is Terrifying” hints at greatness with it’s absolutely stellar opening… until it descends into an interlude that has levels of awkwardness and camp that the appeal of which calls to mind the outsider artfulness of “My Teenage Dream Ended” by Farrah Abraham. For those both fortunate and unfortunate enough to not know what that aforementioned album was… in short, the essence of this interlude is commendable, but it’s clunky and doesn’t work.

“Don’t Break My Heart” is equally as harmless as “Is There Someone Else?” and “Starry Eyes”, however “I Heard You’re Married” drops back down to the same level “Here We Go Again…”, identifying a common theme of failure on this album: the features. Tyler, the Creator’s “Here We Go Again…” feature is lazy and far from what is expected for a rapper of his caliber, while Lil Wayne’s verse on “I Heard You’re Married” is forgettable at best.

The album closes out with “Less than Zero”, a difference in quality of night and day coming after “I Heard You’re Married.” With the Flaming Lips and OutKast influences, it mixes the New Wave vibe I’ve talked about in no shortage during this review with much more modern influences, bringing to mind “Do You Realize?” and “Hey Ya!” All in all, it’s a great track and one of the best album closers in recent memory, a marvel considering the lapse in quality present during this part of the album.

To finish off, I’ll go over the interludes, narrated by the versatile Jim Carey. What they lack in substance, they make up for in presentation, giving off a dystopian, ethereal vibe that in all honesty I only think Jim Carey could bring. Excellent vocal work on his part, added to by great production. Also, I almost forgot to mention the bizarre “A Tale By Quincy” interview. Nothing against Quincy Jones (or everything against Quincy Jones, I’m in all honesty not that familiar with him), this interlude just doesn’t work. Regardless of whether or not he’s a “classic” his interlude adds little to this album.