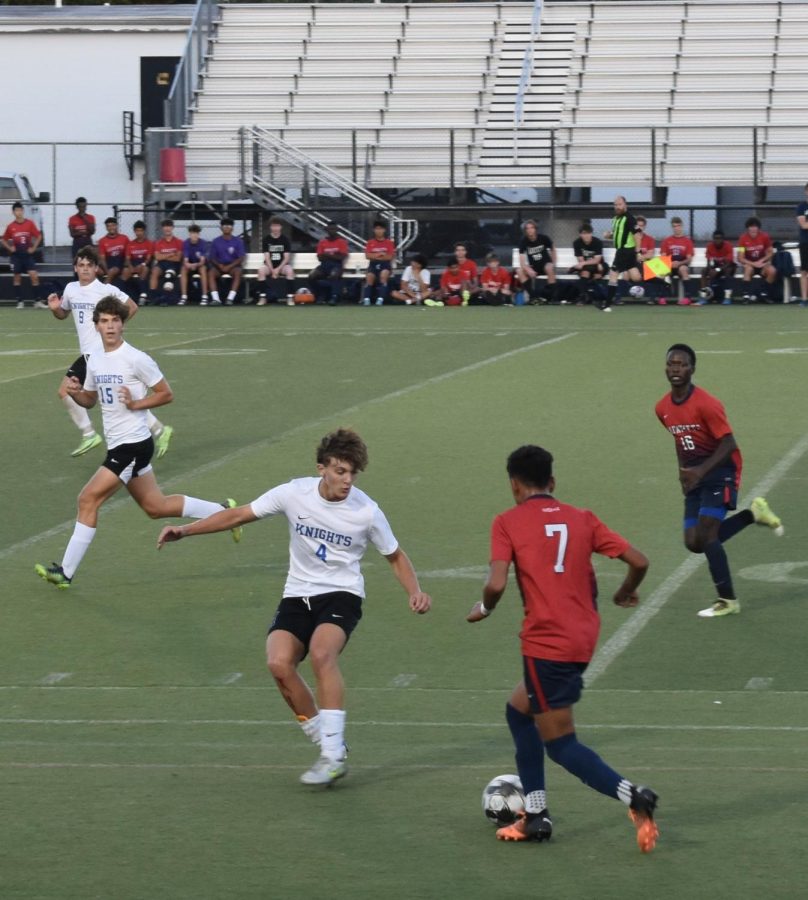 On Tuesday night, the boys’ varsity soccer team took on the Lexington Catholic Knights on home turf at Ishmael Stadium. The Generals are coached by Chris Grimm, and the Knights are coached by Jonathan Kincheloe.

To mentally prepare for the game, Lafayette’s defender and junior Christian Franco says, “[We blast] music in the locker room. We eventually [get] serious during warmups but the locker room is usually a sillier kind of place. Whether we’re messing around singing to the music or just sitting on our phones, we all enjoy a bit of fun at the locker room before games.”

Despite the 0-0 outcome at the end of regulation, the game was not something you would have wanted to miss.

Multiple bookings occurred, with the Generals receiving one yellow card and the Knights receiving two. To add insult to injury, the Generals were also given two red cards and the Knights one, leading to the teams playing eight versus nine field players. A couple of the cards were caused by a fight that broke out when a Lexington Catholic player fouled Lafayette’s senior Joshua Franco. The rest of the cards resulted from multiple fouls throughout the game.

“..Those who received red cards will be punished and are currently ineligible because of their actions,” Franco said in an interview. This will add to the challenges that the Generals face with many players already unable to participate due to injuries. “We’ve had several starters out. Our starting center back was out for the game, and we lost two players to red cards. We’re battling not only the other team but ourselves in the effort to stay healthy, eligible, and adapting to not having starters in our squad.”

The game became even more thrilling after the whistle blew to signal the end of regulation play. The Generals and Knights subsequently played two five-minute halves, but neither team found the back of the net.

The moment the fans anticipated arrived: Lafayette would face Lexington Catholic in a penalty kick shootout. Each team would have five shots.

Next, Lafayette’s Tomas Castro scored in the bottom right corner of the net. Afterwards, Catholic’s Kevin Nevarez was denied the goal when Lafayette’s senior keeper Logan Bittner saved it on the ground.

Following Bittner’s save, Lafayette’s Sophomore Alan Valenzuela scored in the bottom left corner of the goal.
Catholic’s Owen Lane fired the ball way over the goal, freeing Bittner from having to make a save.

It was now up to Lafayette’s senior Chase Cloyd and Catholic’s Jaxson Witajewski to take the last penalty kicks for their team.

The score was 2-2, so if only one team conceded a goal, that team would go down. Cloyd struck the ball in the bottom left corner of the netting, which Stewart could not reach. Then Witajewski did the same thing.

As if things couldn’t get more suspenseful, the second round of penalty kicks followed because of the now 3-3 tie. The shootout continued on a “goal-for-goal” basis, with the teams taking shots alternately, and the one that scores a goal unmatched by the other team is announced the winner.

The first shooter of the second round would be Lafayette’s sophomore Charlie Quinn. He blasted the ball in the right of the net. Then, Catholic’s player drove the ball to the bottom left corner of the goal. Lafayette’s Sophomore Abdullah Bahrani hit the ball wide to the right, missing the frame of the goal entirely. Lastly, Catholic’s Charlie Nichols scored in the left side, securing Catholic the win.

Even though the Generals lost, goalie Logan Bittner was sensational. Franco had enthusiastic thoughts on Bittner’s performance. He declares, “I think Logan Bittner was definitely worthy of the man of the match award; he kept us in the game. He made several great saves, served our team like a leader, and he also kept his head up no matter the result.”

In addition to Logan, many people have taken on the responsibility of a leader this season. Franco states, “For now I have to say, Sawyer Trowel has been very in form lately. Sawyer has stepped up and helped us win and finish out games. He not only serves us as a leader, but he also leads us off the field as a great friend, a great role model, and the best teammate.”

The Generals are looking to improve before Saturday morning to hopefully claim a win.

“As a defender, usually our defense is put under a lot of pressure,” Franco remarks. “One thing that we can improve is our ability to stay strong on the ball and our ability to possess the ball as a team.”

When asked what three words have led the team to success this season, Franco says, “Desire, teamwork, and effort.” The team has several goals this season. However, he says their main goal is to “..defeat Dunbar in our district match next week. They are always the best team in the district and usually the hardest game of the season.”

Since Tuesday, Lafayette hosted Beechwood High School and won by 3-0. The first goal came off of Joseph Babcock, assisted by Nadeer Duek. Accompanying his assist, Duek scored the second goal. The final goal was a forced own goal credited to be generated by Alecx Castro.

The Generals are set to return to the field on Tuesday, August 23, where they will travel to Dunbar High School to face the Bulldogs. Junior Varsity is slated to kick off at 6:15 pm, and Varsity begins play at 8:00 pm.