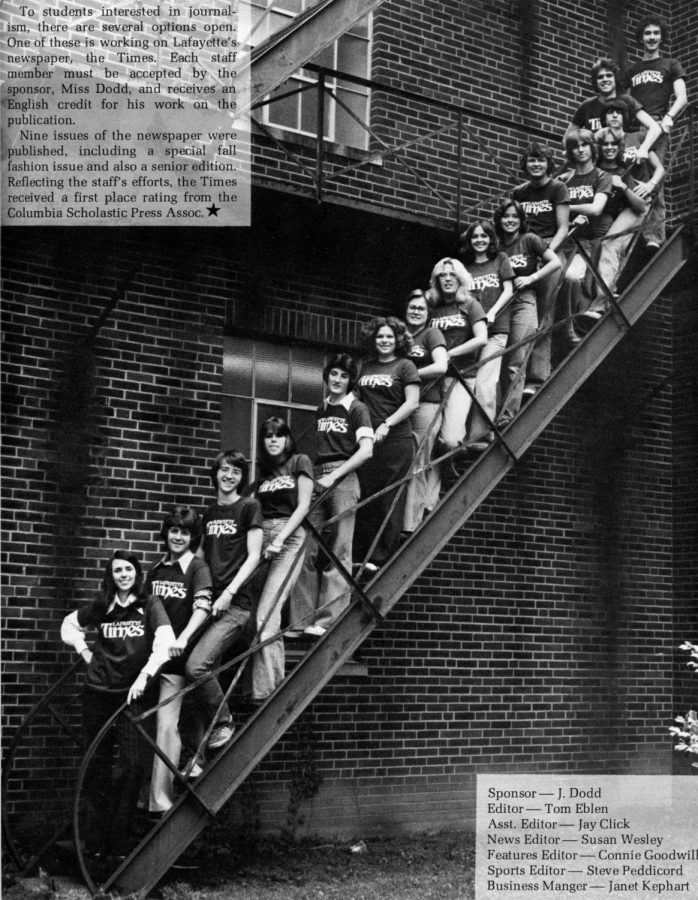 Tom Eblen and other staff writers in 1976

Lafayette offers many Language, Writing, and Media classes to its students. Journalism, the class that works on creating the school’s newspaper, The Lafayette Times, is one of the most outstanding opportunities. Tom Eblen tells us his experience and the impact working on the Lafayette Times made on his life.

Tom Eblen became interested in journalism his junior year of high school. He began as a staff writer, writing band stories. He struggled with this and became frustrated that he wasn’t being featured in the newspaper.  He then took an English elective class called Journalistic Writing. He improved his skills and was given the position of editor-in-chief in 1975-1976.  The Lafayette Times inspired his journalism career and led him to pursue media writing.

After high school, Eblen knew he wanted to major in Journalism. Western Kentucky University, one of the nation’s best undergraduate journalism programs, gave him a small scholarship. He began to work on Western Kentucky’s award-winning student newspaper, The College Heights Herald and was the editor-in-chief his junior year of college.

Following college, he began work at The Associated Press in Nashville,  Tennessee, and was soon covering state government. He was in charge of the AP’s Knoxville Bureau for four years. However,  he left the newspaper, but remained in Knoxville as a journalist for The Atlanta Journal-Constitution newspaper. He moved to The Atlanta Journal-Constitution as a business reporter and covered the airline industry, including the long strike and bankruptcy that led to the collapse of Eastern Airlines.  During his time there, he was able to cover two Olympics – the 1994 Winter Games in Lillehammer, Norway, and the 1996 Summer Games in Atlanta. He worked for the AJC for 14 years and for 6 of those years, was editor-in-chief.

Currently, Eblen writes for The Lexington Herald-Leader as a metro/state columnist. His job is to write several columns a week, in a combination of analysis and opinion pieces, state and local issues, and feature pieces that tell interesting stories. He even goes on to say, “It’s the best job I’ve ever had. I get to choose what I write about, and I get to express opinions. I sincerely thank Lafayette for all the amazing memories and for putting me down the path of Journalism”.