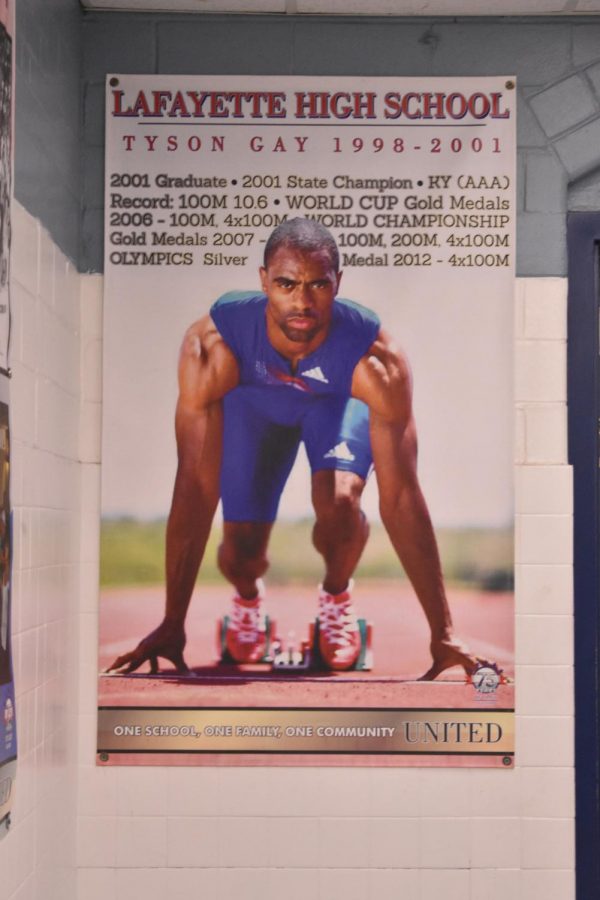 Banner in the hallway at Lafayette, featuring Tyson Gay

February is Black History Month, and Lafayette is featuring Tyson Gay, an African-American Olympic track and field sprinter, and a Lafayette alumnus.

Tyson Gay graduated from Lafayette High School and then proceeded to attend the University of Arkansas. At the University of Arkansas, Gay competed in track and field competitions, readying him for the dedication needed to compete in the Olympics. Tyson competes in 100 and200-meter dashes. His 100 m personal best is 9.69 seconds. This time places him tied with another athlete, as the second fastest athlete in the world. His 2o0 m time of 19.58 makes him the sixth fastest athlete in that area.

Tyson has been challenged greatly in his career and personal life. In 2008, he injured his hamstring and it prevented him from making it to the finals in the 100m at the 2008 Olympic games. Also, Tyson publicly announced that he tested positive for an unnamed, banned substance in 2013. After this scandal, he told the media that he was prepared to accept whatever punishment was apt for his wrong doings. He said he would “take it like a man”. This shows the incredible, persevering personality that Gay has obtained throughout his career and his personal life. Sadly, in 2016, he lost his 15 year old daughter, Trinity, to a shooting outside of a Lexington restaurant.

In the words of Athlete and alumni, Tyson Gay, “I want to find that defining moment that you’re satisfied and you’ve done what you want to do in your life”.  This quote can speak to you no matter your circumstances, no matter if you’re famous and rich, and no matter your age. Thank you, Tyson Gay, for being a light and leader for African-American Athletes, and anyone who is interested in being successful.